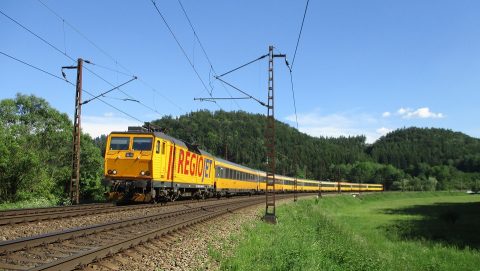 After the success of its international trains to Croatia and Hungary, Czech private railway operator RegioJet is planning to enter the Polish market. The company intends to offer the customers a long-distance train connection within Poland. To this end, RegioJet has applied for domestic open access to the country’s Office of Rail Transport.

RegioJet is planning to run its yellow trains between two Polish largest cities, Warsaw and Kraków, from the mid-December. The relevant apply to Poland’s Office of Rail Transport (UTK) was sent by the Czech operator last week. According to the document, the company’s trains will run on the mentioned route twice a day in each direction. They will consist of 7 to 10 carriages with the different classes of service. Each train will have a capacity for carrying 490-700 passengers.

At the moment, RegioJet does not have open access on a Polish domestic route. UTK is obliged to issue an approval or deny this request within a month. “Before issuing a decision, the regulator may examine the impact of the new proposed service on the economic equilibrium of the public service contract,” the Polish railway body noted.

RegioJet will become the second Czech open-access operator to run its trains in Poland. The first one is Leo Express that provides the connections from Prague to Kraków and Wrocław. As for the Warsaw – Kraków line, it is currently served only by PKP Intercity, the Polish national railway operator. It runs high-speed and conventional trains on the route. They carry passengers between termini in at least 2 hours 17 minutes. RegioJet will become the first non-incumbent operator on this line and a competitor for PKP Intercity. It plans to run the distance between Warsaw and Kraków in 2 hours 30 minutes.

It is worth to add that RegioJet has been planning to enter the Polish rail market for several years. In 2019 the Czech company declared the intention to launch a direct train from Prague to Mostyska, a border station in Ukraine that is equipped with tracks of European gauge (1,435 millimetres). This train should have run via Ostrava and Kraków with bus feeder connections to Lviv and other Ukrainian cities.

This year RegioJet changed its intentions and submitted an application for open access on the Prague – Kraków – Przemyśl route. The city of Przemyśl is located close to the Ukrainian border and is a convenient hub for the passengers from that country. Before the coronavirus outbreak, there were direct trains running to Przemyśl to from several Ukrainian cities such as Kyiv, Lviv, Odesa. The relaunch of these connections is not on the agenda.