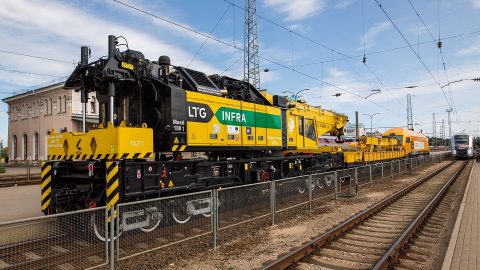 Lithuanian Railways is moving further in its transformation. After major changes in the corporate structure, the state-owned holding has introduced its new brand. Each group’s division has also received a new name as well as a new specific logo and a dedicated colour.

Half a year ago Lithuanian Railways (Lietuvos geležinkeliai or simply LG) completed its corporate reform in accordance with the Fourth Railway Package. It was transformed into the vertical integrated state-owned holding with three separate companies focused on a special area of business: maintenance of rail infrastructure, passenger and freight transportation. Last week, the Lithuanian railway group introduced a new corporate style, which includes the new names of its subsidiaries as well as the new logos and company’s colours.

As a result, Lithuanian railway holding LG was rebranded into LTG Group, where LT means Lithuania (Lietuva in Lithuanian) and G means railways (geležinkeliai in Lithuanian). The previous abbreviation could be confused with the name of LG Corporation, a South Korean multinational conglomerate corporation that manufactures electronics, chemicals, and Telecom products. “It was important to ensure that the new brand names were easy to understand and remember not only in Lithuania but also in the world,” said CEO of Lithuanian Railways Mantas Bartuška.

The shift from LG to LTG has caused the consequent changes in branding the dedicated subsidiaries, some of them have got completely new names. For instance, LG Keleiviams, a passenger transportation company of Lithuanian Railways, was renamed into LTG Link. LG Infrastruktūra, which is responsible for maintenance of rail infrastructure, has received a shorter and clearer abbreviation LTG Infra. LG Cargo, a freight transportation subsidiary, has simply switched to LTG Cargo.

Meanwhile, the rebranded subsidiaries of Lithuanian Railways have also got new corporate colours. Earlier, the red colour was dominant for all of LG’s companies. Now, the situation has significantly changed and each dedicated company has received its own colours: red is for LTG Link, green is for LTG Infra and orange is for LTG Cargo (see the picture above). At the same time, all three companies have a similar abbreviation, LTG, which is painted in dark grey. It is worth to note that Lithuanian Railways has remained its official name in Lithuanian without any changes (Lietuvos geležinkeliai).