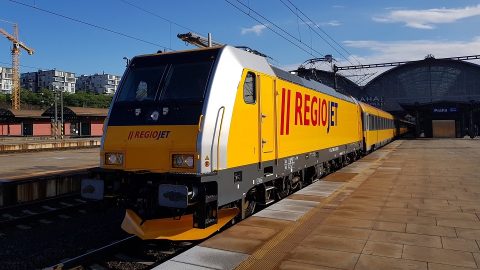 Czech largest private railway operator RegioJet is planning a further expansion abroad. The company will launch a direct summer train between Czechia and Croatia. In addition, it wants to organise a regular train connection from Prague to the Polish city of Przemyśl, close to the Ukrainian border.

For many years, the train services between Czechia and Adriatic resorts have been providing by state-owned operator České dráhy and its partners in the nearby countries. RegioJet intends to intensify competition in this direction. Starting from 30 June, it plans to launch a summer train between Prague and Rijeka. The trains will run on this route three times per week on Wednesdays, Saturdays and Mondays and until the second half of September. As for the further details, RegioJet will disclose them in the coming days.

Besides the Croatian direction, the Czech company is also focused on other routes. In 2019 RegioJet announced its intention to launch a direct train from Czechia to Ukraine via Poland. The open-access operator declared the Prague – Ostrava – Kraków – Mostyska route as the possible train connection. Consequently, it corrected its plans and reduced the eastern link to the Polish city of Przemyśl. It is a convenient railway passenger hub close to the Ukrainian border.

To launch the mentioned connection, RegioJet applied to Poland’s Office of Rail Transport in February. According to the request, the company plans to provide a daily all-year train service with 12 intermediate stops between the termini. This service will be comfortable for travelling from Prague to Poland or backward as the trains will depart in the evening and will arrive at the final destination in the early morning. Moreover, RegioJet has already purchased 18 sleeping carriages from Deutsche Bahn especially for the planned service to Przemyśl.