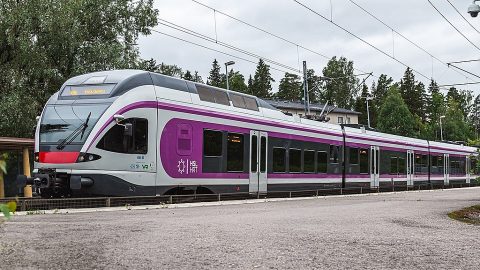 Finnish railway company VR Group has won the first open competition for operating S-Bahn-like train connections in Greater Helsinki. It will run these services in the following 10 years starting from June 2021. In addition, VR FleetCare, the company’s dedicated subsidiary, will maintain the train fleet running on the metropolitan commuter network.

The Helsinki Regional Transport Authority (HSL/HRT) launched the competition in 2017. Seven bidders had been prequalified to participate in the tendering process: Arriva, Go-Ahead, First Rail Holdings, MTR Nordic, SJ, Transdev and VR Group. At the final round, there were only two contestants: Go-Ahead and VR Group. “This win is very important for our business. We are committed to further developing the services together with HSL and to ensuring a more customer-oriented, punctual and smoother commuter train traffic while increasing the popularity of public transport,” CEO of VR Group Rolf Jansson said.

VR Group will start to operate the HSL/HRT commuter rail network in a new role from 27 June 2021. Besides the defined 10-year time-frame, the agreement contains the three-year option. The Finnish state-owned company will receive around 400 million euros for the entire period. For that money, it will provide more than seven million train-kilometres and more than 70 million journeys a year in the Helsinki metropolitan area.

As a result of the competition, the Helsinki Regional Transport Authority has secured cost savings at around 24 per cent or at 275 million euros. “The aim of the competition was to improve both the quality of train traffic in the Helsinki region and its financial sustainability. These goals were achieved,” the agency stated.

As for the rolling stock maintenance, this functionality will be performed by VR FleetCare, the dedicated subsidiary of VR Group. Currently, 81 Flirt four-carriage electric trains run on the Helsinki metropolitan commuter network. “With regard to fleet maintenance, HSL/HRT emphasised quality and reliability in the tender. We will meet these requirements by utilising data in a new way and developing our service continuously,” CEO of VR FleetCare Kimmo Soini said.

He also noted that the fleet maintenance will be provided in a partnership with Stadler Service, the service division of Stadler Rail that manufactures the Flirt vehicles. The maintenance and service of the HSL/HRT’s commuter trains will be carried out at the Ilmala depot in Helsinki. Finnish company RTK-Palvelu will be responsible for cleaning the mentioned rolling stock on the behalf of VR FleetCare.

The S-Bahn-like rail network in Greater Helsinki, also known as the HSL/HRT commuter network, was launched in 1969. Since that time, it has been running by VR Group as an incumbent operator. The network includes 70 stations and consists of 14 lines that connect the Helsinki Central Station to the nearby municipalities of Espoo, Kauniainen, Kerava, Kirkkonummi, Siuntio, Vantaa and Tuusula. It also provides a reliable connection to the Helsinki-Vantaa International Airport. The rail network has an annual ridership of 70 million passengers (according to the 2018 data).