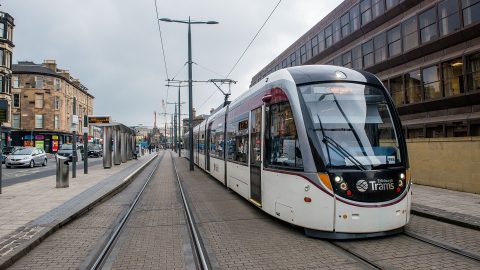 Bail out on British trams

There was no light relief for light rail, as metro systems across the UK suffer precipitous lockdown downturns in patronage. However, a belated support package may safeguard services in a number of UK cities in the face of the coronavirus crisis.

The UK government has answered calls from around the country to extend financial support to tram and light-rail networks. Earlier, passenger heavy rail and bus services had underwritten, and now there is some relief for metro systems too.

Even the most successful operations had faced crippling situations. The metropolitan mayor of Manchester, Andy Burnham had expressed deep concerns over the future of the Metrolink tram network, which connects the ten boroughs of Greater Manchester in north-west England.

Coronavirus fears, and the nationally imposed lockdown has drastically reduced passenger numbers. Operational challenges have compounded what the mayor called a fall in monthly revenue from around 6 million British pounds to “well below 1 million British pounds”. Metrolink only recently celebrated the early opening of a new link to the Intu Trafford Centre. However, patronage is virtually nil, due to the almost complete closure of the huge retail park.

For the first time, Mayor Burnham had called for financial support for the 63 miles (101 kilometres) network, serving 99 stations. “While Metrolink has a proud history of operating without financial subsidy, the current crisis means that is no longer a viable or sustainable option”, he said.

The UK government had already offered significant support to other arms of public transport. Very early in the crisis, the government took the bold step of effectively nationalising the passenger rail network. Later, support was made widely available for bus operators, to avoid a complete collapse of the industry. Now, support will be available to tram networks as well.

With passengers down 95 per cent, it is not just Manchester that faces a make or break situation. Neighbouring Liverpool has a basically heavy rail system, but it is administered by the local authority, and has not been part of the government programme. Metropolitan Mayor Steve Rotheram bluntly said they needed help. “We are just about keeping our heads above water and keeping Merseyrail services going. The farebox has fallen through the floor, we are still running services that need staffing, but we are not getting the returns through the revenue stream, so something will need to happen. We are losing 1.2 million British pounds (1.4 million euros) a week in the combined authority area”.

In Edinburgh, where passenger numbers have fallen almost to nil, work has halted on the extension of the service to the city’s waterfront area. The Scottish capital had been a runaway success story, but lucrative airport traffic, where the tram terminates, has all but dried up. Scotland’s busiest airport is handling little more than five flights daily when previously its control tower dispatched flights every five minutes.

Some local politicians have claimed the entire 207 million British pounds (237 million euros) “Newhaven Extension” is in jeopardy. Graham Hutchison, representing an opposition party on the local authority warned that the impact of coronavirus crisis placed the complicated funding package “under serious threat”. That claim is refuted by council leader Adam McVey, who said the impact on the project budget is limited.

Fraught on the Tyne

It is a smilier story of significantly reduced revenue in Nottingham and Sheffield, where tram networks are both planning expansions. In London, the Croydon Tramlink (south London) and the Docklands Light Railway have both been particularly hard hit by a combination of lockdown and loss of city commuter traffic.

Prior to the announcement of direct support, some local members of parliament have said the situation is even worse for the Tyne and Wear Metro, centred on the city of Newcastle. The system only recently signed a deal to replace outdated rolling stock, but is now in deep trouble. A delegation of ten MPs had written to the UK treasury, seeking immediate support for the system. ”A failure to act now could lead to long-term service reductions and job losses which would be devastating for our region’s transport system and the people, businesses, and communities who rely on it,” said their joint letter. It seems their call has been answered.

Steve Rotheram in Liverpool pointed out that the government had already helped nationally on rail. “We need a local settlement”, he said. “We are determined to keep services running. We reduced services so we can help a core going for essential workers.’

In response to concerns in England, a government representative from the Department for Transport said: “We are aware of the challenges faced by light rail operators, and continue to work closely with the sector and local authorities on the best solution for passengers”. Transport matters in Scotland are the responsibility of the devolved government in Edinburgh.