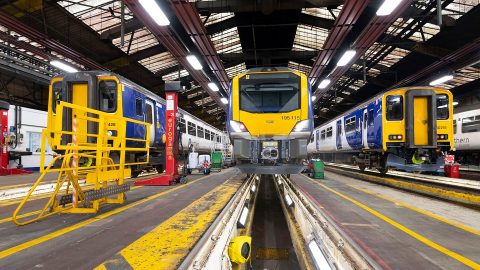 In less than two years after the InterCity East Coast franchise has been taken over by the UK government, a similar story did happen again on another regional network. This time the Department for Transport (DfT) gained control of the rail services in Northern England. Since Sunday, 1 March, Northern Trains, a public-sector train operator, started its activities in the region by replacing Arriva’s Northern company.

“This is a new beginning for Northern, but it is only a beginning,” Transport Secretary Grant Shapps said. For two years, the passengers in Northern England had been suffering from delays and cancellations. In the following 100 days, Northern Trains under the leadership of Richard George will develop the improvement plan in order to address the issues. To this end, the government operator is negotiating with local leaders, industry and passenger representatives. Without awaiting this document, the government has already been committed to implementing some measures. Among them are to boost the capacity on the Manchester – Leeds route, to lengthen platforms at 30 railway stations, to better clean the trains and to improve the reliability of Sunday services.

The Northern network with annual traffic of over 108 million passenger journeys has many issues connected with rail infrastructure. “Many of Northern’s problems are infrastructure-related. The Transport Secretary has instructed the leadership of the public-sector operator to sit down with Network Rail and build a comprehensive new masterplan to review congestion around Manchester. Continuing to assess the Castlefield Corridor, as well as key junctions and interactions across the wider network to develop a series of interventions which will actually deliver the improvements required. Further interventions around Leeds will also be considered,” DfT stated.

Northern Trains is the second public-sector train operator running on Britain’s railway network. Another one is London North Eastern Railway(LNER) which is serving the routes of the InterCity East Coast franchise since June 2018. The company has already succeeded to improve the train connections on its network. UK’s government hopes that Northern Trains will follow this success.

The public-sector train operating companies are also known as the operators of last resort. Before LNER and Northern Trains, there were two more occasions of the government-owned operators. In November 2003 – March 2006 South Eastern Trains was running the rail services between London and Kent (the South Eastern franchise). Another example was dealt with the mentioned InterCity East Coast franchise. From November 2009 to February 2015, this network was operated by East Coast government company.

It is worth to note that the UK Cabinet incorporated a dedicated company for operating rail franchises under public ownership. First, it established Directly Operated Railways (DOR) in July 2009. In November 2015 the latter was replaced with another entity – DfT OLR (operator of last resort) Holdings Limited, also abbreviated as DOHL. It is led by Robin Gisby who also chairs LNER.

Arriva in the UK

In spite of losing the Northern rail franchise, Arriva will continue its operations in the United Kingdom. However, two franchises will end in the near future. In October of this year, the New Cross Country franchise will expire. It is operated by CrossCountry (XC Trains), a subsidiary of Arriva UK Trains, that provides intercity and long-distances connections from Cornwall to Northern England and Scotland bypassing London. In December 2021 Arriva could lose the Chiltern Railways franchise on the mainline of the same name.

Moreover, Arriva is running the London Overground network between London and its environs on behalf of Transport for London (TfL). Another company of the group is Grand Central that is not a subject to franchising. It is working as an open-access operator with train connections from London to Sunderland, Bradford Interchange, Blackpool. Earlier, Arriva had planned to launch another open-access company known as Great North Western Railway (GNWR) for operations between London and Blackpool via the West Coast Main Line. Starting from this spring, these services will be provided by Grand Central.