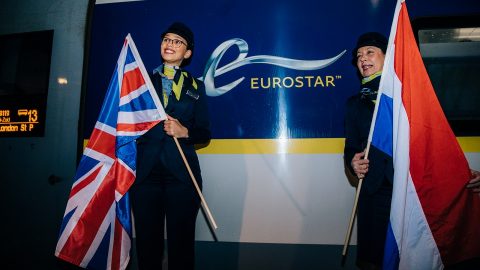 Despite Brexit, the rail links between the Netherlands and the United Kingdom will be improved this Spring. European cross-border high-speed railway operator Eurostar will launch a direct train from Amsterdam to London from 30 April. Another new service will connect the British capital to Rotterdam starting from 18 May. Ticket sales for new links will start on 11 February at the initial price of 40 euros for a single journey.

In order to promote the new services, the direct train has departed from Amsterdam Central station on Tuesday, 4 February, at 07:48. The event was attended by Minister of Infrastructure and Water Management Cora van Nieuwenhuizen and State Secretary for Justice and Security Ankie Broekers-Knol. Four hours and nine minutes later, the train arrives at St. Pancras International station in the heart of London where it was welcomed by Grant Shapps, Secretary of State for Transport of the United Kingdom. For the Rotterdam – London service, the journey will take three hours and a half.

From 2018 the direct Eurostar trains are running only from London to Rotterdam and Amsterdam. To travel in the opposite direction, the passengers must change a train in Brussels. “The direct connection makes the train journey to London easier and faster. Changes in Brussels will no longer be necessary, this will quickly save an hour of travel time for voyagers. Therefore, a train really becomes a fully-fledged alternative to an aircraft,” said Cora van Nieuwenhuizen.

“The sustainable train has the future and brings Europeans together,” noted Roger van Boxtel, CEO of Nederlandse Spoorwegen (NS). According to the Dutch company, Eurostar train running between London and Amsterdam produces 80 per cent less CO2 emissions per passenger than a plane flying between the same destinations.