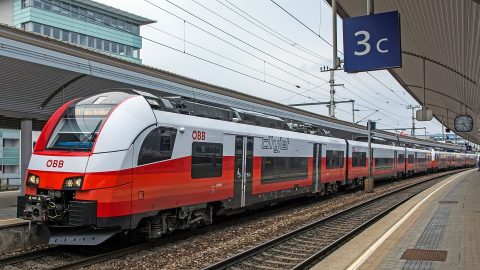 Austrian Federal Railways (ÖBB) has improved the S-Bahn train service in Vienna. The railway company provides new overnight connections between 1 a.m. and 4 a.m. They run in the night-time from Friday to Saturday, Saturday to Sunday and before the public holidays.

The new overnight train connections were launched on 15 December. Earlier, there was no train service between 1 a.m. and 4 a.m. and the passengers were obliged to use other modes of transportation. The new overnight trains run on two important lines with a frequency of once per half an hour. The first route is the Stammstrecke (“trunk line”), the main 13-kilometre railway section of Vienna S-Bahn network. It connects stations of Vienna Floridsdorf and Vienna Meidling. Most of Vienna S-Bahn lines run via the Stammstrecke. This section is marked on the maps with dusky pink colour.

The second route is Line S45 between stations of Vienna Hütteldorf and Vienna Handelskai. It is also known as the Vorortelinie (literally ‘Suburban Line’) and is drawn on maps with light green colour, while the other lines are marked with light blue colour. The passengers can use the new overnight trains on both routes from Friday evening to Sunday morning and in the night-time before the public holidays.

The S-Bahn network was launched in Vienna in January 1962. It provides a fast and reliable connection between the city core, suburbs and the adjacent municipalities in Lower and Upper Austria. Currently, the network consists of 10 lines. They are served by several types of trains: ÖBB Class 4020 (the oldest type that is running since 1979), Siemens Viaggio Twin (double-decker push-pull trains), ÖBB Class 4024 (introduced in 2004), ÖBB Class 4744/4746 Cityjet (the newest type of trains that is being operated since 2015). There are 890 trains per day on the S-Bahn network. Annually, they transport 89 billion passengers.