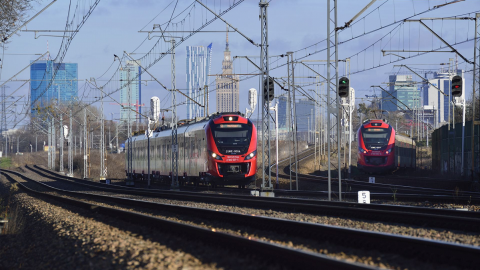 SKM Warszawa, a railway operator of S-Bahn routes in the Warsaw metropolitan area, will continue to develop its service on four directions. The first two ones include investments in the new rolling stock and maintenance facilities. Also, the company intends to introduce so-called eco-driving and digital solutions. These moves will improve the S-Bahn network in Warsaw in the next six-eight years.

Despite the recent failure in the procurement of 21 electric trains from Pesa Bydgoszcz, Szybka Kolej Miejska w Warszawie (SKM Warszawa) does not cease the effort to extend its fleet. The new tender will be launched in the coming future. According to the company’s CEO Alan Beroud, this task is the highest priority for SKM Warszawa. It is expected that the new trains would be introduced on the network by the end of 2022.

Besides the new vehicles, the company wants to implement the so-called eco-driving, a way of train operation that allows reducing the energy consumption. One of the possible solution to implement the eco-driving is the digitalisation. With the help of innovative IT tools, SKM Warszawa plans to reduce its maintenance costs for rolling stock and energy supply. The acquisition of new trains requires the company to solve the issue with the technical and parking facilities for them.

At the end of October, Alan Beroud announced that as a chairman of SKM Warszawa he will try to turn the company into the leading railway operator in the Warsaw agglomeration. “One of my personal goals is to work on making the choice of rail transport in the city and communes close to Warsaw for travelling to the centre of the capital or office districts a matter of so-called first choice, which today is unfortunately individual car transport,” he specified.

Therefore, all the above-mentioned moves are dedicated to the planned extensions of SKM’s network. Currently, the company’s development plans include the extension of Line S9 to Piaseczno, southward from Warsaw, and to Zegrze, northward from the Polish capital as well as the launch of a brand new line that will cross the city in the west-east direction and will link Ożarów Mazowiecki with Rembertów via Warszawa Gdańska station.

SKM Warszawa was established in February 2004. The company started its train operations in October 2005 on the section between the stations of Warszawa Zachodnia (Warsaw West) and Warszawa Falenica. Later it was prolonged to Pruszków and Otwock connecting the western and southeastern suburbs of Warsaw (Line S1). Now, the company’s network consists of four lines. Two of them connect the city core with Warsaw Chopin Airport, on one side, and, on another side, with the northern (Line S3) and eastern suburbs (Line S3) of the Polish capital.

On the weekdays, Line S4 provides direct access for the passengers from the northern suburbs to Warszawa Zachodnia station bypassing the city centre. The company operates a train fleet of 28 units supplied by the Polish manufacturers Pesa Bydgoszcz (13 units) and Newag (15 units). SKM Warszawa is the fifth-largest railway operator in Poland (according to the volume of passengers). In 2018 it carried around 19 million passengers or 6.1 per cent of the total traffic in Poland.