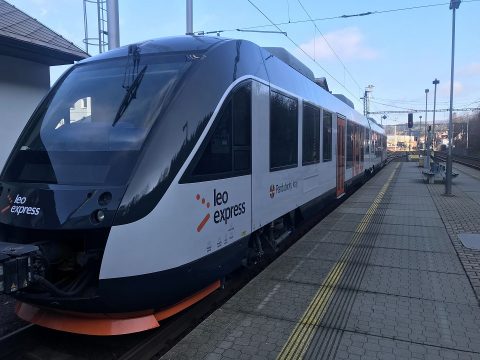 After several years of successful operations on the mainline between Prague and Ostrava, two major Czech private railway operators are preparing to enter the country’s regional lines. On 15 December 2019, Leo Express will launch its trains in Pardubice Region while RegioJet will start operations in Ústí nad Labem Region of Czechia. They will provide these connections within the 10-year period.

In order to promote its new regional service, Leo Express has performed the test ride on one of the future routes. On Wednesday, 6 November, the company made a presentation trip of its Alstom Coradia Lint diesel train to be operated in Pardubice region. The vehicle ran from Lichkov to Prague with stops at Jablonné nad Orlicí, Letohrad, Ústí nad Orlicí and Pardubice. In 2018 Leo Express purchased 14 Alstom Coradia Lint units from the German subsidiary of Transdev. They were upgraded, painted in white, black and orange colours and branded with the logos of Leo Express and Pardubice Region (see the image above).

Leo Express will provide its commuter services in the Ústí nad Orlicí District, located in the southwestern part of Pardubice Region. The company will serve three links. In spite of the segment between Ústí nad Orlicí and Lichkov is electrified, Leo Express decided to operate the diesel trains for all services in order to avoid additional changes for the passengers living close to non-electrified sections. There will be introduced a special tariff on the routes of Leo Express in Pardubice Region. The tickets will be sold by train conductors, at Leo Express ticket offices and even at cash desks of the state-owned operator České dráhy.

The company’s key service in Pardubice region includes Line 025: Ústí nad Orlicí – Letohrad – Králíky – Mlýnický Dvůr. Leo Express will perform over 20 daily train connections on this route. Four daily services will be provided on Line 025 between Dolní Lipka and Hanušovice only at the weekends. It is worth to note that this line is partially located in Olomouc Region. And the third service is the direct Prague – Pardubice – Ústí nad Orlicí train. During the weekdays, there will be one daily connection while two others will be performed at the weekends.

Unlike Leo Express, another Czech private railway company RegioJet has some experience in providing regional connections. In Spring 2010, when the company was starting its rail operations, it made several weekend trips in Ústí nad Labem Region. Initially, RegioJet performed the promotional trips on the Děčín – Krupka line, then on the Ústí nad Labem – Litvínov line. Nevertheless, the regular train service was launched in October 2011 on the Prague – Ostrava – Havířov main route. In the following years, the operator unsuccessfully declared its intentions to start regional connections in several Czech regions. However, RegioJet has managed to start its service on the regional route in neighbouring Slovakia. Since March 2012 the company is carrying passengers on the Bratislava – Dunajská Streda – Komárno line.

After the several-year break, RegioJet will return to Ústí nad Labem Region, on the west of Czechia, starting from 15 December. The company will serve seven lines. Three connections start at Ústí nad Labem and go to Lysá nad Labem, Děčín, Klášterec nad Ohří. Four other services are provided on the Most – Žatec, Klášterec nad Ohří – Bílina, Kadaň-Prunéřov – Poláky, Teplice v Čechách – Litvínov lines. During two years, RegioJet will use DB Class 628, the twin-car diesel trains which are currently being used for the Bratislava – Dunajská Streda – Komárno service. Afterwards, these units will be replaced with the Elf twin-car vehicles produced by the Polish company Pesa. In March of this year, RegioJet ordered seven trains of this type to be delivered by December 2021.

Most of the regional lines will still be served by the state-owned operator České dráhy. At the same time, several other private or foreign railway companies, besides RegioJet and Leo Express, will also strengthen their presence across Czechia. Czech manufacturer of signalling equipment AŽD Praha will launch the weekend regular operations on the Lovosice – Most line. This railway is almost entirely (35 of 44 kilometres) owned by AŽD Praha. The company purchased the Čížkovice–Obrnice section three years ago when it was abandoned and without any train traffic.

Two other operators belong to the foreign state-owned railway groups. Arriva vlaky, a subsidiary of the UK-based Arriva which is a part of Deutsche Bahn, is working on the Czech regional routes since September 2013. Currently, the company serves only two connections: the Praha Hostivař – Roztoky u Prahy line of the Esko Prague network (the S-Bahn-like service in Prague) and the Prague – Nitra long-distance line. The latter links Prague with the Slovak cities of Nitra and Trenčín running via Pardubice, Olomouc and Uherské Hradiště. In the mid-December, Arriva vlaky will add four long-distance routes from Prague to Tanvald (via Mladá Boleslav), Rakovník, České Budějovice and from Kolín to Rumburk (also via Mladá Boleslav) as well as three regional links in Liberec Region (Liberec – Nová Paka, Lomnice nad Popelkou – Stará Paka, Železný Brod – Tanvald) and three connections in Zlín Region (Vsetín – Horní Lideč – Bylnice/Púchov, Vsetín – Velké Karlovice, Staré Město u Uherského Hradiště – Bylnice/Veselí nad Moravou/Luhačovice).

The Germany-based company Die Länderbahn will also extend its network in Czechia with two regional routes: Osek – Most – Rakovník and Lužná u Rakovníka – Jirkov. This operator is owned by Regentalbahn which in its turn is managed by Italian state railway holding Ferrovie dello Stato Italiane. It is focused mostly on the regional services in Bavaria bordering with Czechia. At the same time, Die Länderbahn is providing several cross-border links from Bavaria to the Czech nearby regions of Liberec (the city of Liberec), Karlovy Vary (Kraslice, Cheb), Ústí nad Labem (Rybniště).