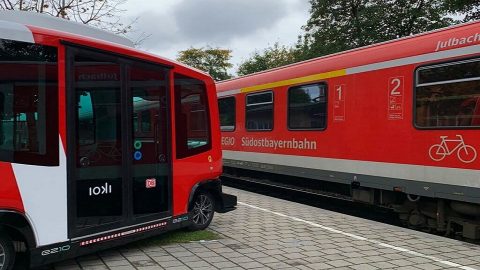 Automatic Train Operation, more commonly known as ATO, is becoming more and more familiar to the railway companies across Europe. Just in the Netherlands, two railway operators have already tested the technology and the third one plans to do this by the year’s end. Not only the autonomous trains attract the railway undertakings, but the self-driving shuttle minibuses are also interesting to them.

After two-year trials on the public roads in the Bavarian spa town of Bad Birnbach, Deutsche Bahn (DB) has moved further in examining the capabilities of the autonomous shuttles. In early October the operator opened the new two-kilometre route for the self-driving vehicles. It connects the town core with the local train station. The service is provided by ioki, the DB’s subsidiary, in order to test the last-mile journey. Two EZ10 minibuses produced by the France-based company EasyMile are running daily between the termini. “The eco-friendly electric bus has no driver, no steering wheel and no accelerator pedal. There is only one steward on board who can intervene if necessary,” ioki states.

When the new autonomous vehicles will be introduced for the passengers on a regular basis, it is hard to forecast. But it is worth to note that the railway operators keep an eye on the innovation carefully. And Deutsche Bahn is not alone in examining the self-driving electric shuttles. The railway undertakings in other European countries have already gained experience in similar trials. For instance, Swiss national railway company SBB together with Mobility Carsharing, Zugerland Verkehrsbetriebe (ZVB), the City of Zug and the Zug Technology Cluster are testing the same EZ10 shuttles. The vehicles are running between Zug train station and the Zug Technology Cluster carrying up to nine people per time. By the end of this year, the pilot project is scheduled to be accomplished.

Afterwards, the participants will analyse the results and decide whether it is worth and safe to introduce self-driving vehicles as an integral part of the transport network. The similar tests with the EZ10 autonomous shuttles were also performed in Norway by Vy Buss (former Nettbuss), a subsidiary of the state-owned railway company Vy (former NSB). However, these trials were not dealt with delivering passengers to the train station.

DB considers the autonomous shuttles as a possible solution for the transport of the future in rural areas. With their help, the company hopes to improve the connectivity between the countryside and its train routes as well as, of course, reduce costs for the last-mile service. Currently, DB owns several bus companies that provide feeder connections for rural areas. Therefore, autonomous minibuses could replace the convenient buses on these routes.

Nevertheless, most of the experiments with self-driving vehicles are being carried out in the cities. Besides the railway undertakings, the city public transport operators also examine the innovation and even introduce it into their networks. Thus, in 2017 the worldwide company Keolis launched the self-driving service in Las Vegas, the first one in the U.S.

In June of this year, Wiener Linien, the operator of underground, tram and bus lines in the city of Vienna, started the same experiment. The Austrian company launched the auto.Bus – Seestadt project. It is dedicated to monitor and research the self-driving shuttle service in real-life conditions. The vehicle produced by another French company Navya is being carried passengers to/from Seestadt metro station on the two-kilometre route.

As is the case with the automated trains, the biggest challenge for the self-driving shuttles is an emergency stop. Of course, the developers equip the vehicles with cameras, sensors, software to detect the obstacles and react to them. However, real-life operations have already shown all the importance of this problem. In the past three years, several collision of the self-driving shuttles were recorded.

The first accident with the unmanned minibus happened in Las Vegas in November 2017. Notably, the minor collision took place during the first day of operation and the self-driving shuttle was hit by a human-driving lorry. After the investigation, the lorry driver was found to be at fault. “The driver of the truck was probably watching where his trailer was going, and didn’t notice where we were. The so-called “crash” happened in super slow motion, and merely dented the plastic panels on the front of the shuttle,” the Digital Trends reported. Similar accidents are not unique. Thus, a minor collision between the autonomous shuttle and a pedestrian was recorded in Vienna this year. Such examples prove that self-driving technology needs to be upgraded and improved in order to provide a safe service to customers. There is a lot of work to do for both transport companies and development teams.