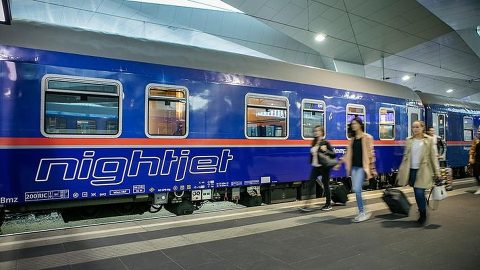 Night trains will return to Netherlands in 2020

After a four-year break, night trains will return to the Netherlands. They will connect the country with Germany and Austria. The new daily service will be provided by Dutch national railway operator Nederlandse Spoorwegen (NS) and Austrian Federal Railways (ÖBB). It will be available for the passengers from December 2020.

The night trains will run on the Amsterdam – Munich – Innsbruck/Vienna route. They will depart from Amsterdam early in the evening and will arrive in Munich, Innsbruck or Vienna in the morning. In Nuremberg, the trains will be divided into two separate sections: one will go towards Munich and Innsbruck, another – to Vienna.

Each night train will consist of three types of coaches: open coaches for travelling on seats as well as the couchette and sleeping cars that provide an opportunity for comfort sleeping during the journey. This variety impacts on the ticket price: a journey in an open coach costs starting at 29 Euros, in a couchette car – at 59 Euros and in a sleeping car – at 89 Euros. To provide a high level of comfort, the sleeping cars have luxury compartments with private bathroom and breakfast included in the ticket price.

The restoration of the night trains was made possible due to government support. Stientje van Veldhoven, State Secretary for Infrastructure and Water Management, has announced that the Dutch Cabinet will allocate the money in the coming years to fund the project. This fact was also confirmed by Roger van Boxtel, CEO of NS. “The night train needs some support,” he said.

As for the Austrian side, it is long and hard subsidising the night and long-distance train connections of the state-owned railway operator ÖBB. Among the latest moves of the Austrian government in this direction is its decision to allocate 11 billion Euros to ÖBB within the 15-year period in order to support the company’s services. Such conclusions cause criticism by the private railway operators that have no access to the state subsidies. The Alliance of Passenger Rail New Entrants (AllRail) called this factor as one of the key risks for the EU rail market.

Nederlandse Spoorwegen considers the night trains a good alternative to flights. “Today travellers can hop on the night train from Düsseldorf. By extending this connection via Arnhem and Utrecht to Amsterdam, the Netherlands is again directly connected to the European night train network. I am sure that travellers will appreciate it. For more and more destinations with a distance of up to 700 kilometres, a train is already the best choice. With the night train, we also offer longer distances sustainable alternative to the aircraft,” noted Roger van Boxtel. He also specified that NS and ÖBB are working together on the ticket prices and train schedule to make the service convenient to passengers and competitive with flights.