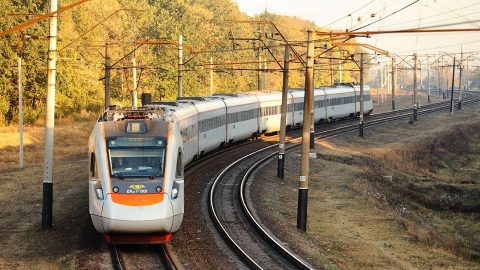 The recently appointed government of Ukraine intends to finalise the transformation of Ukrainian Railway. The country’s state-owned railway company will be divided into three separate operators with different functions. Two of them will be privatised while the third company responsible for maintenance of rail infrastructure will remain under the state control.

Currently, Ukrainian Railway (Ukrzaliznytsia, UZ) is a state-owned joint-stock company with a monopoly status. It transports passengers and freight, maintains rolling stock and rail infrastructure. UZ is one of the largest Ukrainian state enterprises. The cabinet of Oleksiy Honcharuk intends to open the Ukrainian railway market for private and foreign investors.

The first move is to divide the Ukrainian Railway. “It should be split. There is a model when an enterprise is divided into three operators,” said the Prime Minister of Ukraine Oleksiy Honcharuk at the press conference. According to him, three future operators will have different functionalities. One will be responsible for passenger transportation, another – for freight transportation and the third one will maintain the rail network. The first two operators should be privatised while the third one will be the state-owned with the options for private investments.

At the same time, the President of Ukraine Volodymyr Zelensky has set a task for the government to finalise the reorganisation plan of Ukrainian Railway by the year’s end. The document will provide the liberalisation of the haulage services on the country’s rail network. It means that private companies will receive the right to operate their own locomotives on the infrastructure of the Ukrainian Railway. Moreover, an independent railway authority should be also established.

When and how the Ukrainian passenger and freight railway operators will be privatised, these questions still have no answers. One of the possible paths to privatisation is the Initial Public Offering (IPO). The government of Ukraine has not declared any official position regarding this theme. However, CEO of Ukrainian Railway Yevhen Kravtsov provided his opinion to the local media in favour of IPO. “My vision is to focus on IPO, i.e. on selling some stocks on the open market. In this case, the state should remain the controlling interest but the private investors will be attracted to provide funds for the company’s development,” he said in an interview to the UNIAN news agency.

Mr Kravtsov noted that Ukrainian Railway could take a leaf from PKP Cargo, the Polish rail freight operator. In October 2013 it debuted on Warsaw Stock Exchange. The state-owned railway holding PKP SA offered to the private and institutional investors the package of 50 per cent minus one share. In 2014 another package was sold on Warsaw Stock Exchange. Now, the state owns via PKP SA only 33,01 per cent of PKP Cargo shares.

Ukrainian Railway was incorporated as a state-owned joint-stock company on 1 December 2015. Before that date, it was functioning as State Administration of Railway Transport of Ukraine “Ukrzaliznytsia”, the governmental body responsible for railway operations. Ukrainian Railway operates a network of more than 21,000 kilometres, 47 per cent of them are electrified. The company owns over 1,900 electric and over 1,600 diesel locomotives, 84,000 passenger coaches and over 100,000 freight wagons. The vast majority of the rolling stock has expired its lifespan and should be phased out. UZ has a staff of 276.1 employees (at the beginning of 2018). Last year the company carried 151.1 million passengers and 318.8 million tonnes of freight.