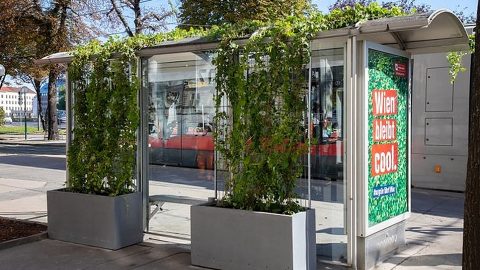 To improve the city environment, the Vienna public transport operator Wiener Linien has started to convert its stations into green oases. The first five waiting shelters at the tram and metro stops have been equipped with a living roof made of the climbing plants. Next year, the project will be extended to other stations.

Five green-roofed shelters can be found at the tram stations of Universitätsring/Stadiongasse (Lines 1, 71, D), Salztorbrücke (Line 1), Julius-Raab-Platz (Line 1), Weihburggasse (Line 2) and at the metro station of Krieau (Line U2). To provide the living roof at these installations, the Municipal Department 42 – Parks and Gardens planted the five-meter Parthenocissus tricuspidata (in German “Mauerkatze”), a climbing flowering plant. Two plant troughs were installed at the rear of every shelter. They are equipped with a water reservoir and a water-storing, humus-rich substrate. The climbing plants provide the passengers with an additional shadow, creates a habitat for insects, cool the streets and eventually improves the city environment.

In order to extend this project to other stations, Wiener Linien is looking for new ideas. To this end, the public transport operator launched an ideas challenge at the Public Procurement Promoting Innovation (IÖB), an Austrian national competence centre for innovation procurement. The ideas are submitted until 10 October. “We want to give the innovative architectural, gardening and other companies an opportunity to contribute their ideas,” Wiener Linien Managing Director Günter Steinbauer said.

At the same time, the University of Natural Resources and Life Sciences (BOKU) explores the green spaces close to the Wiener Linien transport network between Siebenhirten and Leopoldau. The BOKU researchers collect the plant and insect species up to five times a year in order to investigate the impact of the green spaces on biodiversity in the city. They have already discovered the large carder bees, the very rare species of bumblebees. “The public transport is not only the lifeblood of the city, but it also creates new habitats for many animal species,” Günter Steinbauer noted. This project will last until the end of 2020.