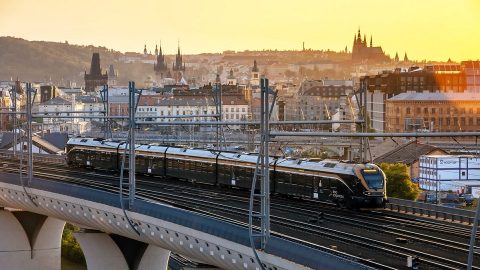 Czech private railway company Leo Express has strengthened its presence in Poland. Instead of the weekend connections, the operator has launched a daily train from Prague to Krakow. The average single ticket costs 20 Euros.

The Prague – Krakow daily train has started to run on 28 June. It runs between the termini in 6 hours 30 minutes. The train makes 12 intermediate stops in Czechia and 9 stops in Poland including Pardubice, Olomouc, Přerov, Ostrava, Katowice. Passengers can choose three classes of service: economy, business, premium.

From Prague, the train departs at 16.09 and arrives at Krakow at 22.57. The return journey starts in Krakow at 04.50 with an arriving time to Prague at 11.23. If the passengers want to travel in another part of the day, they can choose the mixed (train-bus) connections of Leo Express with a short interchange in the Czech town of Bohumin, near the Polish border. The daily train service will be available until 2 September.

Leo Express is regarding Poland as one of the key markets to develop its business. The company launched the Prague – Krakow train in July 2018 after the multi-year attempts. This service was provided from Friday to Monday: the train departed from Prague on Fridays and Sundays, from Krakow – on Saturdays and Mondays. In March Leo Express has appealed to Poland’s Office of Rail Transport (UTK) to obtain a license for carrying passengers on the Prague – Krakow – Medyka (border with Ukraine) and Prague – Warsaw – Terespol (border with Belarus) routes. These lines will allow the company to attract more passengers from Ukraine and Belarus respectively.

Besides the train, Leo Express operates several bus and minibus routes in Poland. They are served as the feeder connections to its trains or deliver passenger from railway stations to the Polish airports of Krakow and Katowice. The company’s bus network in Poland includes two routes: Ostrava – Krakow (with a stop at Krakow airport) and Warsaw – Ostrava – Brno – Vienna. The minibuses run from Ostrava to Krakow via airports of Katowice and Krakow as well as from Košice to Krakow (also with a stop at Krakow airport).