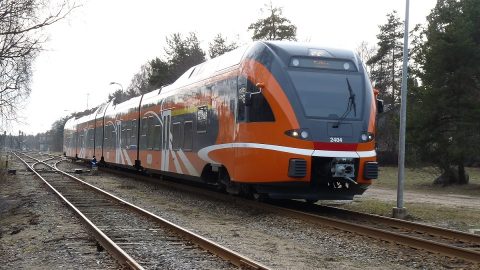 The railway service between Tallinn and Pärnu, the fourth largest city in the country, will be cancelled per 9 December this year, announced Estonian rail operator Elron. The main reason is the poor technical condition of tracks on the Lelle-Pärnu section. The Stadler Flirt diesel trains will be replaced by buses. The officials convinced passengers that the new service is a convenient option for them.

The Estonian government has assured that the suspension of trains to Pärnu is a temporary decision, and they will return on the tracks after the completion of the Rail Baltica line in 2026. This standard-gauge dual-track electrified railway will connect the city with the capitals of both Estonia and Latvia. “Upon completion of the Rail Baltica line, Pärnu will have a very good railway connection with Tallinn and Riga,” said Minister of economics and infrastructure Kadri Simson.

Today, Elron operates two daily trains between Tallinn and Pärnu. They will run until 9 December, when a new timetable will become operative. After this date, the train route will be shortened to Lelle station, 70 kilometres from Pärnu. According to Pärnu officials, there will be three daily bus connections to Lelle, allowing passengers to continue their travel to Tallinn by train. The bus service will be organised by local authorities.

Currently, Pärnu is the dead-end station of the Tallinn-Pärnu single-track non-electrified line. The city has no other railway connections, but with Tallinn. Earlier, the line was continued to Riga via Mõisaküla station on the Latvian border. The Tallinn-Pärnu-Riga passenger train was operative until February 1992. The regional connections between Pärnu and Mõisaküla were suspended in 1996, the freight service in 2000. On the Latvian side, the tracks of the Pärnu-Riga railway were dismantled from the border to Skulte station, 56 kilometres from Riga, in 2005-2006, and on the Estonian side in 2008.