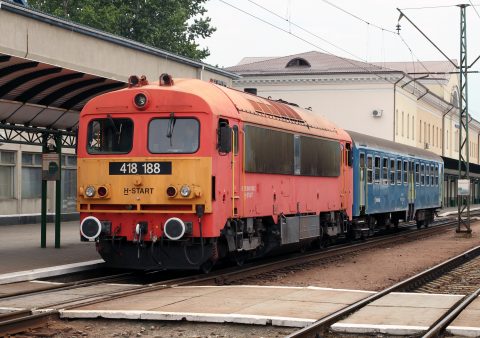 Hungarian State Railways (MÁV) is testing a new railway connection to Ukraine. The service will connect Budapest with the Ukrainian city of Mukachevo via a dual gauge railway. There, passengers will allow to change trains and reach Lviv, Ternopil, Kiev, Odesa, Kharkiv and other Ukrainian cities.

Hungary and Ukraine are getting closer to launching the new, simplified railway link between the countries. The Budapest – Mukachevo route is expected to open by the year’s end. Meanwhile, the MÁV train has arrived at Mukachevo station on 15 November for a trial on Ukrainian tracks.

The Budapest – Mukachevo train will run via Szolnok, Debrecen, Nyíregyháza, Záhony and Chop railway junctions. According to the acting CEO of Ukrainian Railways Yevhen Kravtsov, the first-class ticket will cost circa 1044 Hryvnas and the second-class ticket 712 Hryvnas (circa 33 and 23 Euros respectively). However, it is unknown whether the price is final, or it will change. The schedule also needs to be adjusted. The expected travel time will be around seven to eight hours. Today, the Intercity train runs from Budapest to Záhony station, close to the Ukrainian border, in six hours.

The new railway link will use the dual gauge track (1435 and 1520 millimetres) and it will not require bogie exchange or new rolling stock with gauge adjustable wheelsets. The dual gauge railway runs from the border between two countries to Mukachevo station. Owing to this, Hungarian trains will be used on the route, as Ukrainian Railways has no rolling stock suitable for the 1435-millimetre gauge.

Currently, Hungary has several rail links with Ukraine: one of them is provided by MÁV, two others by Ukrainian Railways. MÁV operates seven daily cross-border trains between Záhony and Chop. This service also uses dual gauge railway. The trainset consists of a diesel locomotive and one passenger wagon. The cross-border Záhony – Chop section is non-electrified, although the further lines are electrified with direct current on the Ukrainian side and with the alternating one on the Hungarians side. Ukrainian Railways operates wagons running from Kiev to Vienna via Budapest and from Lviv to Budapest using a bogie exchange system at Chop station.