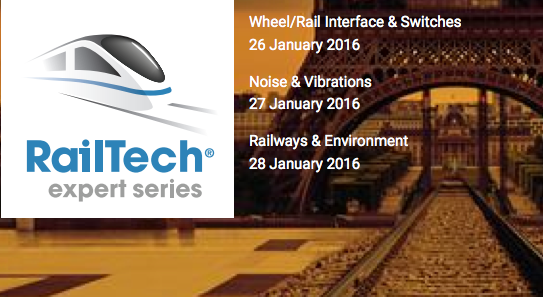 Published on 20-11-2015 at 12:19
20 November 2015After consultation with the UIC we have decided to reschedule the conferences to the 26th, 27th and 28th of January 2016, taking place at the UIC Headquarters in Paris.Tuesday 26 January – Wheel/Rail Interface & Switches
Wednesday 27 January – Noise & Vibrations
Thursday 28 January – Railways & Environment15 November 11:00 CET

We are deeply shocked by the appalling attacks which took place in Paris this weekend. Our hearts go out to the families and friends of all those affected.

Given the current situation in Paris, I have decided that it is in everyone’s best interests that we postpone the Paris Rail Technology Conferences to the first quarter of 2016.

A number of speakers and delegates have already cancelled, and we know that many more participants have concerns about attending. The terrorist attacks carried out in Paris this weekend have thrown a large shadow on our conference, and I believe that it is beneficial to all delegates and speakers to postpone it to a later date.

We do not want to give in to terrorism, but we also need to be both sensitive and realistic.

Last night there was a police raid at the Pullman Hotel, next door to the UIC. Fortunately, it was a false alarm, but it is another indication of the Paris Police force’s current state of high alert. People are being advised to exercise caution in all public places. The Paris Police are restricting movement around the city. Systematic border control checks have been implemented at all entry points into France. Large-scale events scheduled for the coming days, such as the Congress of French Mayors, will be canceled. A national state of emergency and a three-day period of mourning until 17 November have been declared.

In these extraordinary circumstances, I hope that you will understand why this difficult decision has had to be made.

We will communicate a new date for the Paris Rail Technology Conferences during the course of this week. In the meantime, if you have any questions, please do not hesitate to contact us: