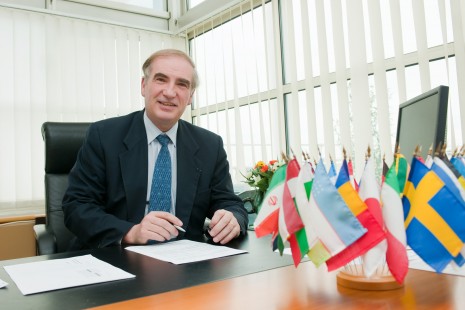 General manager UIC: railway is the backbone of the transport sector

In the future the transport sector will have to focus on the needs of the traveller by using different modes of transport, such as freight transport, electric cars or urban public transport. There has to be a transport mix, with railways as backbone. To accomplish this the railway industry must improve its competitive position, according to Director-General Jean-Pierre Loubinoux of the UIC. Loubinoux gives a presentation on Railways and Environment on 19 November during the Rail Technology Conferences in Paris.

Rail is by far the most sustainable mode of transport according to Loubinoux. “The international rail sector is fully aware of the important role it plays in the green scenarios of the United Nations. Rail will continue to develop alongside other modes of transport through the 21st century.”

In order to play a full part in this transport mix the rail sector must move forward in the areas of sustainability, reducing costs, increasing capacity and reducing the barriers of interoperability and differences in administration, according to Loubinoux. “There should be steps taken to further reduce CO2 emissions, for example by electrification of the track or the use of more sustainable fuels.”

Another way to improve profitability is by increasing capacity. According to Loubinoux this can be done in a number of different ways. “The capacity of rolling stock can be increased by using longer freight trains and ensuring they are fully loaded.

New safety and security systems can allow more trains to use the same tracks at the same time. For example, ERTMS allows trains to run with higher speed.”

“The construction of intercontinental rail corridors can secure the position of railways as backbone of the transport sector. To be successful, technical and administrative interoperability is required.”

Loubinoux also expects that the financing systems of railways will change. “You see in countries with many innovation and a growing rail network that there is a mix of both public and private investments. This mix will continue to increase in the future.”

The Union Internationale des Chemins de fer (International Union of railways), is the global organization for the rail sector. The UIC was established in 1922 to harmonize equipments for rolling stock and infrastructure and unify operation rules for railways at international level. From the foundation in 1922, UIC included members from Japan, China, USSR, North Africa and the Middle East. UIC has 240 members spread from all 5 continents and is continuously growing.

The Railway Technology Conference runs from 17 to 19 November at the headquarters of UIC in Paris. The themes of the conference are ‘Wheel/Rail Interface and Switches’, Noise and Vibrations and Railways and Environment.

Click here to register for this interesting event:
https://www.railtech.com/en/conferences/paris-conference/register/