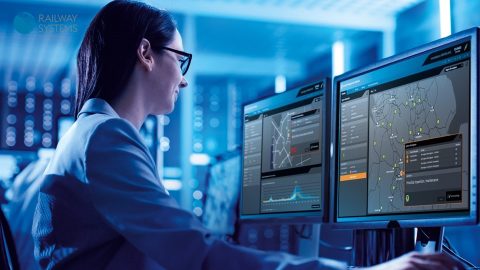 How combining data can make the most of train monitoring

“Just alarming is not enough, with fleet condition monitoring we want to keep the fleet in such a condition so that incidents do not happen”, says Markus Urban, Product Manager at voestalpine Signaling. Along with his colleague Richard Lenthall, Vice President of Sales, they will talk about their Central Management Software (CMS) in a RailTech webinar together with Niels Kloppenborg, fleet manager at DSB.

The Central Management Software (CMS) of voestalpine Signaling Siershahn, a subsidiary of the global leading company in the fields of railway infrastructure, voestalpine Railway Systems, is essentially a decision support system, Richard Lenthall explains. It combines both the alarming functions and predictive maintenance into one interface. CMS can also connect to other interfaces, for example RFID systems and the train numbering database of the railway operator to identify the exact train. As the monitoring systems are in the tracks, to point out where an outlier in the data comes from.

The system can also for example connect to the signalling interface of the railway. “When there is an alarm and a train with a defect needs to be taken out of operation, it cannot just stop at any point on the tracks. So you also want to show in the signalling that there is a hot box detection, and to find a secure section where the train can stop”, says Markus Urban.

Customers can also extract measurements from the CMS system for use in their own applications, such as planning software. To simplify interfacing voestalpine developed a standard protocol to feed the live measurements into that application. “We often find that the CMS platform is often provided to customers who then ask us to tailor the software’s function to their own unique requirements”, says Lenthall. There is always a period of tailoring for the platform so that it maximises the benefit for the user, he says.

Together with DSB, voestalpine tested some machine learning algorithms to get more insights in the data, says Urban. The system measures that there is a usual force on the track, but this could be caused by multiple types of wheel failures. With machine learning, it becomes possible to find out if it is a flat wheel or if there is material fallout on the wheel, for example. The latter is much more dangerous, as the damaged wheel could break. With algorithms, the team tries to find trends on the components, and for this a lot of data needs to be analysed.

DSB has air suspension in their trains, which serves like a spring which can be made harder or softer. If the suspension is filled incorrectly, then there can be more pressure on one side of the rail than on the other side. “We make a report for the customer containing customised information helping to maintain the vehicles before damage”, says Urban. “That is not our specific expertise but we have the values, and DSB has the knowledge about their vehicles, and together this becomes a success.”

voestalpine has worked with DSB for over eight years in this field. The current version of the CMS system was created in 2017. The main improvement compared to previous versions is the fleet condition monitoring application, says Lenthall. “Before, it was more about securing the customers’ operation, notifying them when there is a train on the network where the bearing is too hot or the wheel too flat”, he says. “And ten years ago, that is what the customer wanted. Since 2015, the conversation has changed to ‘how do we stop getting alarms by having proper maintenance?’.

Join the RailTech webinar ‘CMS: how can combining data make the most of train monitoring?’ on 26 October at 14:00 CET. Richard Lenthall and Markus Urban from voestalpine Signaling are available for your questions. Niels Kloppenborg, fleet manager at DSB, will join as a guest to talk about the experiences of the operator. Register here!