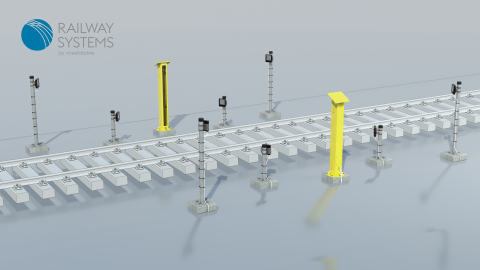 Over the years, a variety of customer enquiries have been made, such as wanting to know whether cargo has become unstable during the train’s movement, which could point to an imbalance. Others have asked about the possibility of recording UIC numbers. “We still often find that there are customer needs that we cannot satisfy with our current offering”, says Distlberger.

In a nutshell, the VTA consists of high-definition, high-speed cameras that work in conjunction with near-infrared flashes that remain invisible to the human eye. These are the basic hardware components. How the system is installed really depends on the user case and user needs, although there are of course approximate camera positions for capturing bogies, the roof or sideview of a train.

The current flagship pilot installation at the LogServ Group’s Railway Academy site in Linz, Austria, features 5 cameras and 9 near infrared light units to support image quality. Around 13,500 wagons use the track where the system is installed on a monthly basis, providing a solid basis for collecting data and analyses, business analyst Tobias Bähr says, adding that voestalpine has seen that the system already achieves a hit rate of over 98 percent.

Through the active development phase, voestalpine has been able to hone in on a number of VTA functions, which include but are not limited to:

The above-mentioned functionalities are perhaps the more obvious ones. VTA can in fact also be utilised to detect wheel wear and, thus, assist in condition-based maintenance. Something you might not immediately think of is checking whether the hook that keeps the tarpaulin in place is locking correctly. Or using the graffiti on a train as a fingerprint to identify it going forward.

So what does this mean for the end-user? How does a business and its staff stand to benefit from VTA? For starters, it can eliminate the fault-prone and tedious task of wagon registration, Distlberger lists as an example.

“Imagine a company that wants insight into the traffic on the network on their premises. Now, they often don’t know where the wagons are or what the sequence of the wagons was. So they will have someone check them manually upon entering and leaving the site. Apart from that not being a very fun job, it also exposes the company to the risk of human error. VTA can also add value for when the sequence of a passenger train has changed in that it can quickly identify the new sequence and help travellers find the right train car”, Distlberger.

Secondly, voestalpine prides itself on the integration of the VTA in the Modular Diagnostic System (MDS), Richard Lenthall, Vice President of sales, says.   “We see in the market that most other companies have standalone system, which means they are appealing to a set number of customers, who then obtain data through a defined, bespoke interface connected to that particular system type. This requires IT infrastructure and support systems. Our features are integrated in an existing platform, so that customers can compare and analyse data in conjunction with the other monitoring function that we can install on the mainline. That can be of benefit to a customer’s operational monitoring strategy and also to the benefit of railway employees, who can access everything they need on one system. They don’t have to haul several laptops around”.

So why now? Cameras and infrared have been around for a long time. And computer processing power also is not an issue. “A number of customers have now reached a level of maturity in terms of network quality, meaning that their data bandwidth can support a VTA system” Distlberger explains. “When you start transferring images and videos, you risk overloading the existing networks of railway operators. In the near future, the conditions will arise for VTA systems to thrive.”

Later this month, voestalpine Signaling will host a live webinar with RailTech.com about VTA. Tune in for a detailed presentation and Q&A on August 31. Click here for registration.

Suddenly, now LCC, by far…, are too high – simply “Bottleneck” of Industry – and Reason, for “predictive maintenance”, of “optimal”… (of repairing…).
Low price (“Standards”…) regrettably, has passed – best before date…
At derailments…(apart of those track related, majority) among individual, broken rails, by far, is most frequent. (Currently, high quality steel,
Rail, now is “Fuse”, the informer – of fatigue…) For sustainability, now basics, safe, serious, SWL is requested!…