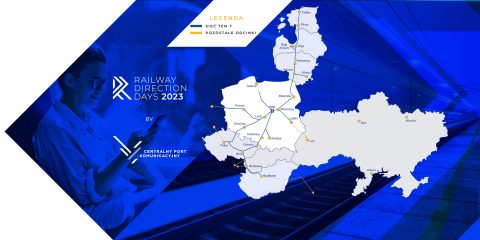 Published on 20-01-2023 at 07:00
Map of the high-speed rail network with a connection to Ukraine Centralny Port Komunikacyjny (CPK)

The main objective of the agreement is the development of new cross-border connections between Poland and Ukraine on the European 1435 mm gauge, in particular the construction of a high-speed railway line. The agreement initially lasts for three years, in which the cooperation will be established via the creation of a working group, which is to fulfil the high-speed rail objectives through workshops, joint research, exchange of documentation and experience.

The first step will be a joint feasibility study for the high-speed line Warsaw-Lviv-Kiev, which will have an assumed maximum operating speed of 250 kilometres per hour. CPK has declared its readiness to exchange knowledge and experience, and to transfer its technical standards of the high-speed line, as well as the Passenger Transport Model.

Ukraine’s railway network is in 1,520 mm gauge, which is prevalent in all post-Soviet countries, as well as in Russia. A high-speed railway line in European gauge to Poland would thus be the first line connecting Ukraine westward in the same railway gauge. Similarly, the Baltic states which also have 1,520 mm rails are also building a high-speed railway line in European gauge, making it easier to connect to the railway network of neighbouring countries in Europe. CPK signed a cooperation with Rail Baltica and Czech rail infrastructure manager Správa železnic as well this week.

“Today’s agreement aims to improve railway links between Ukraine, Poland and the EU, facilitate passenger traffic, improve economic exchange and strengthen the safety of our transport corridors”, said Volodymyr Shemaev, Director of the Office of International Projects of Ukrainian Railways at the signing. “I hope that cooperation with the CPK will bring us closer to the construction of the first HSR with a European gauge and will be an important step towards Ukraine’s integration with the EU”.

Mikołaj Wild, CEO of CPK, commented: “This is a historic moment. Together with Ukrainian Railways, we are starting joint work on the Warsaw-Lviv-Kiev HSR line. The shortest route from Ukraine to the EU goes through Poland and CPK”.

CPK and Ukrainian Railways will also jointly seek opportunities to obtain EU funding for the planned lines. The EU standards for the design, construction and maintenance of railway infrastructure will be implemented in the plans, including for signalling and GSM-R communication. In the future, both parties also agreed to jointly develop a management model for the constructed lines. The signatories also declared their willingness to contribute to the reconstruction of Ukraine once the war Russia is waging in the country is over.

Going through Warsaw is quite a detour for much of the traffic from Lviv to C. Europe. With a route from Kyiv to Lviv through Luzk or Riwne (pop. >200,000), Lviv would be a detour en route to Warsaw.

I believe the two main alternatives would be to build the Ukrainian from Lviv to close to Przemysl, also good for Lviv-Warsaw, then build a new diagonal line Przemysl to Lublin, or build from Riwne or Luzk straight to Lublin (pop. 340,000).

At a separate new cargo system, the service rendered ware owners, will be ensured, as well high quality as redundancy – at large scale cargo transports…
Best of course it is with both.