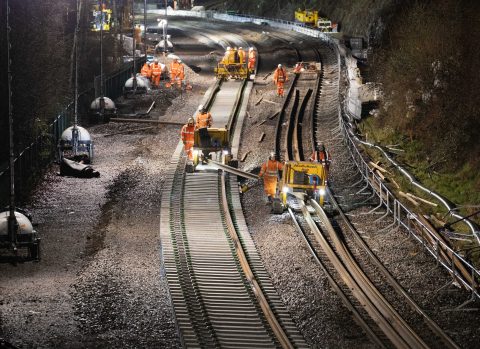 The UK government may be unable to make up its mind, but its infrastructure agency Network Rail is powering ahead with energising the north of England. The Transpennine Route Upgrade has seen its first electric wires erected as part of the scheme. Sparks now fly in North Yorkshire between Church Fenton and Colton Junction, where trains from Leeds join the East Coast Main Line on their way into York. This is one of the busiest stretches of railway in the north of England, with over 100 trains using the section each day.

The Transpennine Route Upgrade programme, funded by the UK government’s Department for Transport, is intended to provide a much better corridor, connecting cities and ports across the east-west corridor of the north of England. The project is expected to take most of the decade to complete. The relatively short section between Colton and Church Fenton takes only a few minutes to traverse, but it represents a significant step forward for the project.

Faster than ever – but not as fast as possible

Network Rail are working with a number of engineering partners and also with the operators on the route, including all the freight companies who move traffic over the heavily congested route. When the entire route is electrified, the permissible top speed will be raised above 100 miles per hour (160 kilometres per hour) for the first time in almost two centuries of existence. “It is the first step towards a cleaner, greener, fully-electrified railway between York, Leeds, Huddersfield and Manchester”, say Network Rail. “When the newly-installed wires are energised, they will allow more environmentally-friendly electric and hybrid trains to run at speeds of up to 125 miles per hour [200 kilometres per hour] – that’s 30 miles per hour [58 kilometres per hour] faster than they can currently run.”

No one is denying that the Transpennine Route is long overdue a major investment. However, there is no small measure of disappointment that project is only part of the wish list, that included a dedicated high-speed line across the Pennines, the mountain range that forms the backbone of England, and divides the cities of the north. Stakeholders in the North say that even the upgraded route will not have the desired additional capacity to satisfy all the various demands upon it – particularly local passenger and regional freight services.

Last year’s merry-go-round of government ministers has not helped, but none of those briefly charged with responsibility for transport matters has agreed to funding the cost of the tunnels required to route a new high-speed line through the Pennines. Nevertheless, that has not stopped the current rail minister from taking a bow as the wires have been installed. “Our multi-billion pound Transpennine Route Upgrade will transform journeys across the North of England, with faster, more frequent services and improved accessibility”, claimed Huw Merriman. “This is the first major milestone on the way to a fully electrified route between York, Leeds, Huddersfield and Manchester, which will reduce journey times and save 87,000 tonnes of carbon emissions each year.”

How much of that carbon saved is dedicated to rail freight remains to be agreed. Paths for express, inter-urban passenger trains will undoubtedly take precedence. After all, the government will be keen to show off that new higher line speed to best effect. An intermodal train hauling containers from Hull to Liverpool doesn’t make as good a photo opportunity as a hybrid express from Leeds to Manchester.

In fairness though, the four-track sections of the route, that include new sections, all electrified, will give those freight services an opportunity to share the stage with fashionably sleek passenger trains. The Colton to Church Fenton section does lend itself to being a public relations ambassador for the project. Over the last four months, engineers worked almost 9,000 hours to install a total of 37 miles (just over 59 kilometres) of overhead wire along this four-track stretch of line – around nine route miles (15 kilometres). “Work was carried out overnight at weekends to cause as little disruption to passengers as possible”, say Network Rail. It is worth noting that freight services will likely benefit most from overnight paths made available on the revamped route.

“When complete across the full 70-mile route [112 kilometres] across the Pennines, rail passengers will be helping to save up to 87,000 tonnes of carbon emissions each year – the equivalent to 5.9 million car journeys along the same route”, say the Network rail team. We’re sure they mean freight as well. “For people living near the railway, it will also mean better air quality and quieter trains”, they add. “To maintain an equally eco-friendly construction, we assembled the new overhead line equipment locally at our nearby logistics hub and transported it to the site by train. Work to join the newly-installed wires into the existing overhead line equipment on the East Coast Main Line at Colton Junction will take place in the future, ahead of their energisation in 2024.”

This piece was first published by sister publication RailFreight.com.

Robust, resilient and redundant modes, they upgrade – for added load – and lower cost…
Short of resiliency, however railways remains stuck at old standards.
(For added load, now just longer trains is single, neither optimal, nor resilient option – and the over head el. devastatingly is short of redundancy…)
Accordingly, railways shortcomings, low quality, etc., visavi other modes, etc. will remain.
As intermodal, now Weak Link decisively has to be attended – quality and capacity upgraded!

Bradford. A City of 547000 people, hung out to dry again. Sunak should hang his, completely out of touch head in shame.