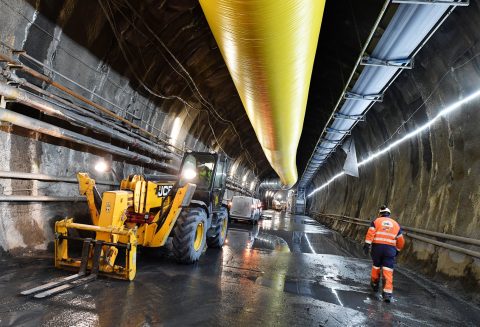 Over 150 French public personalities have signed a letter asking to stop the construction of the Turin-Lyon railway tunnel and redirect the investments toward exiting trains and routes. The letter was published in Reporterre, an independent French media outlet, on 20 December. The signatories include the mayors of Lyon and Grenoble, as well as Members of the European Parliament.

The signatories of the letter accuse the proponents of the project to have decreased trains between France and Italy by five times. Moreover, they claim that 200 million euros intended for rail in the Alps have in fact been used to finance the Frejus road tunnel. Another accusation included in the letter is that no trucks have been taken off the road, despite the existing rail line being 30 per cent cheaper than using the road. Finally, they are pointing out that the project is having a significant environmental impact, especially on the forest in Maurienne.

First and foremost, the signatories are demanding that the existing railway crossing the French-Italian border should be used again at the same pace it had in the 2000s. Moreover, they want the money that would be invested in the Turin-Lyon tunnel to be diverted immediately to open a road-to-rail loading platform in the Ambérieu-en-Bugey area, east of Lyon.

They are also demanding that the 20 million euros of yearly profit from the Mont-Blanc road tunnel be exclusively used to finance the shift from road to rail. In addition, they want that the 200 million euros spent so far on the Frejus road tunnel over the past 10 years to be returned to the railways. For example, they proposed to increase capacity on existing lines in the area around Lyon, including Aix-les-Bains – Annecy, La Roche-sur-Foron – Saint-Gervais, and Saint-André-le-Gaz – Chambéry

The signatories are demanding that, in 2023, companies involved in road transportation in the area should be offered rail shuttle options. Finally, they are asking for the “decision to open the safety gallery of the Fréjus road tunnel to be canceled and that the latter be reserved exclusively for emergency vehicles”.

The idea of a new additional railway line between Lyon and Turin was brought forward by French railways SNCF in 1990, while the actual design and project were drafted in 2001. Since 2005, this project has been included in the TEN-T project launched by the EU, as part of the Mediterranean Corridor. Freight trains will be able to run at 120 km/h, which is not considered to be high speed in the EU since 2008 when the minimum was raised to 160 km/h. The same goes for passenger trains, for which the maximum speed allowed on the track will be 220 km/h, while the EU minimum was raised to 250km/h 14 years ago.

The whole line will be 235 kilometres long and the project was divided into three sections. The line between Lyon and Saint Jean de Maurienne will be funded by the French government and managed by SNCF. The railway connecting Bussoleno with Turin will be funded by the Italian government and managed by RFI. The third section is the tunnel mentioned above that crosses the two countries. For this project, Tunnel Euralpin Lyon Turin (TELT) is the company in charge of designing, building, and managing the tunnel. It is co-owned by the French State, via the Ministry for the Ecological Transition, and the Italian state, via Ferrovie dello Stato, Italy’s state-owned railway holding company. Forty percent of the cross-border section of the Lyon-Turin railway line is financed by the European Union under the Community programme for the construction of the Trans-European Transport Networks.

A version of this article first appeared on sister publication RailFreight.com