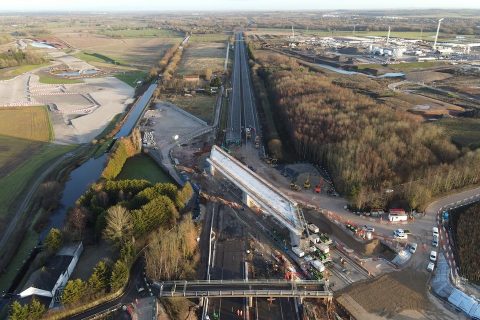 The HS2 high speed rail project in Britain is claiming a world first for their ‘bridge slide’ operation, carried out over Christmas, and over the M42 motorway in Warwickshire, in the English Midlands. Engineers claim the move of the 12,600 tonne bridge represents the world’s longest box slide, surpassing grandiose projects around the globe.

The installation of a rail bridge over the M42 motorway by HS2 Ltd is being celebrated as a world-first by the high-speed rail project. The bridge will carry the new line, currently under construction between London and Birmingham, over the major highway, and northwards into Cheshire and Crewe. The three-day project to position the prefabricated bridge directly involved around 450 people from HS2’s construction contractor in the Midlands – Balfour Beatty VINCI (BBV).

The record claimed by HS2 is for the combined payload of 12,600 tonnes, and the 165 metres of horizontal ‘slide’, to position the bridge across the motorway. The whole bridge structure is almost 200 metres long – half the length of a fully constituted HS2 train. The slide method dramatically cuts disruption to road traffic. HS2 say it is part of their overall plan to reduce the impact of construction on local communities.

The site team worked around the clock over the Christmas break to move the Marston Box bridge into place. The operation took forty hours, with the hydraulic rams pushing the structure forward at a speed of four metres per hour, somewhat slower than the 225mph [360kph] expected of the HS2 trains that will use the structure. The motorway was closed for ten days to allow preparation and completion of the project, reopening in the early hours of Tuesday the third of January 2023. The project comes on the heels of the Curzon Viaduct project in central Birmingham.

“This is the first box slide of its kind over a motorway in the UK”, said Mike Lyons, in charge of civil engineering delivery at HS2 Limited. “It’s a great achievement for HS2 as we quickly approach peak construction. It’s fantastic to celebrate another big milestone for a project that is already providing work for almost 30,000 people today, and in the future, it will encourage people to use zero carbon public transport.”

Over the last six months, the giant structure was prefabricated built on land next to the motorway. The sliding mechanism, designed by specialist civil and structural engineering company Freyssinet, allowed the box to be pushed into place over the motorway on a guiding raft over a distance of 163 metres – which HS2 believes to be the world’s longest box slide.