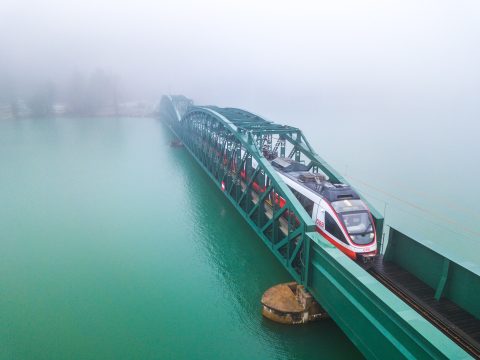 ÖBB has wrapped up its “largest electrification project in recent years” with the overhaul the Marchegger Ostbahn. The project completed on Thursday enables the introduction of the low-floor Cityjet rolling stock. Elsewhere in Austria, the Rosentalbahn was electrified.

Work on the Marchegger Ostbahn included the electrification of a 37-kilometre long section of the railway, as well as the modernisation of seven new stations in Lower Austria. Furthermore, all railway crossings were removed in favour of overpasses and underpasses. Finally, parking facilities were improved to enable commuters to to switch to trains with ease. Travel from Vienna to Marchegg will be reduced by 5 minutes once the new timetable comes into effect on Sunday.

In the coming three years, ÖBB will work on the expansion of the Marchegger Ostbahn to two tracks across the full length. Work on that project commenced earlier this year.

On Wednesday, ÖBB also inaugurated the newly electrified Rosentalbahn. Over the past 1,5 year, the operator has worked to electrify 12-kilometres of railway between Klagenfurt and Weizelsdorf to the tune of 50 million euros. The 67-metre-long Hollenburg bridge was also modernised as part of the works. The state of Carinthia aims to have electrified all passenger railway lines by next year. In the current decade, the state is hoping to bag 650 million euros worth in infrastructure investments.