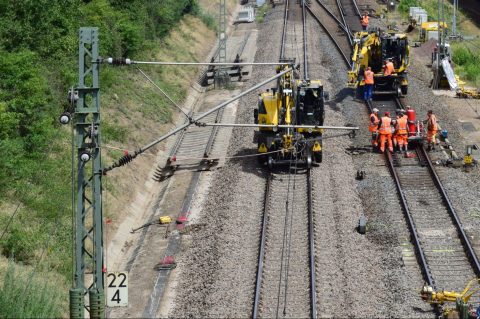 The railway between Hanover and Berlin will probably not be released for traffic until mid-december, Deutsche Bahn (DB) has said in its latest update. This would mean a another setback of at least two weeks for the section where earlier this month two freight trains collided.

The site of the accident between Hanover and Stendal had been under the authority of the local fire brigades since November 17 due to the high quantities of propane gas that was spilled and released. This also resulted in the first delay in the process of handing the section over to regular traffic, which was originally forecast to happen on Sunday. However, the accident site was only handen over to DB and distaster relief agency THW last Saturday.

Some 35 DB and THW staff are now working with two cranes to lift and remove the overturned wagons and the locomotive. Only when all the rolling stock has been removed, can teams make a proper assessment of the damage to the rail infrastructure.

Trains in the area have been rerouted to Uelzen to the north of Hanover, from where they continue to Stendal and onwards to Berlin. The cancellation and delays will probably remain a factor until mid-december, a DB spokesperson told local media.

Too obvious it is: The by far safest and most energi effective on shore mode has turned Bottleneck.
Now low risk is high quality and accordingly those alternative devices proving robust, resilent and redundant all, handsomely are rewarded by willingly paying clients – and vice versa.
For proving optimal, now risks have to be outed from railway infrastructure!
(As at all other public affairs, now as well at railways risks and safety factors has to be provided for!)
A New Old Railway is needed!