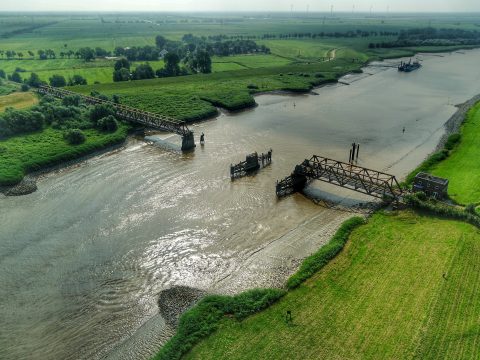 The construction of the new Friesen bridge over the river Ems in Germany is turning out much more expensive than initially thought. The cost of rebuilding the railway bridge, important for cross-border traffic to the Netherlands, is now estimated at 200 million euros by DB Netz. Immediately after the accident that damaged the bridge in 2015, DB Netz was still assuming a repair that would cost 5 million euros. The bridge is expected to be able to reopen by the end of 2024, which will greatly benefit international train traffic.

The old Friesen bridge , or Friesenbrücke in German, was hit by a freighter called Emmsmoon in December 2015. Part of train traffic between Groningen in the Netherlands and Oldenburg in Germany has been blocked ever since. International traffic goes via buses. Train passengers can travel by train as far as Weener where the bridge is located, and have to change to a bus to Leer.

It took a long time after the accident before any real action was taken. Only at the end of 2021 was dismantling of the bridge started. In the meantime, the construction of a new bridge had been considered. In the end, a lift-and-turn bridge was chosen, to be built in Austria and brought to Weener by truck. The cost of new bridge construction ran from 5 million for repair, to 30 million, 66, 96 and 125 to now thus 200 million. The final cost is expected to be somewhat higher still.

Reasons for the ever-increasing cost budget are plentiful, according to rail infrastructure manager DB Netz. No fewer than 40 engineering firms collaborated on the design of the new bridge, as construction and construction of the new lift and swing bridge – the largest in Europe, according to DB Netz – is a particularly technically complex job. Moreover, during the tendering process, only a few contractors turned out to sign up, meaning that an easy economic choice could not be made. Furthermore, higher costs for construction materials and personnel are also reasons for the sharp increase in costs.

The floating lifting platform ‘Andreas’ is currently drilling pilot holes in the river bottom to check whether it encounters any obstacles there. This is where the sheet piling for the new bridge piers will be driven next year. They are also digging a ditch behind the dike near Weener, where the cables for the bridge will soon be buried. So the construction of the bridge is still in the preparatory phase, it may be said.

Nevertheless, according to DB Netz, the Friesenbrücke could be reopened by the end of 2024. The Wunderline between Groningen and Bremen is also scheduled to start running around that time. Travellers can reach Bremen or vice versa from Groningen within two and a half hours via that line. That time would be shortened by another 20 minutes if all the necessary adjustments are made by 2030 to make the Wunderline suitable for high-speed trains.

After the first two steps, the first of which includes the new Friesenbrücke, and as a second step the doubling of part of the track between Leer and Oldenburg, the line will be suitable for speeds of 120 kilometres per hour. For increasing the speed to 160-200 kilometres per hour, the Wunderline route on the Groningen-Oldenburg section does have a number of obstacles. For instance, the subsoil is weak and major interventions are needed to guarantee the crossability, liveability and safety of and along the route at high speeds, according to a study by Jans! infrastructure projects. For international connections, the Wunderline can play a major role, such as the Amsterdam – Copenhagen connection and a high-speed rail link between Paris and Stockholm.