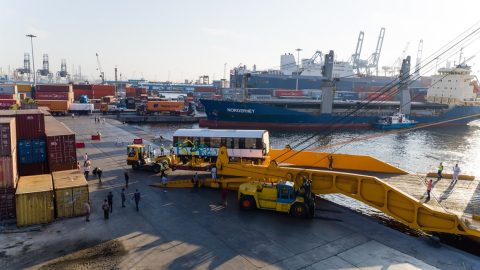 Alstom carried out the first trail run with its Innovia 300 monorail train in Cairo this week. Local authorities aim to enter the city’s two planned monorail lines into operation in 2023.

The trial run was carried out between the New Capital City depot to the east of Cairo to station 22. Once fully operational, the line will be 57 kilometres in length. The other line connection the area of Cairo west of the Nile to Giza will be 42 kilometres. The lines will have a capacity of 45,000 passengers per hour in each direction thanks to 70 Alstom Innovia 300 monorail trains. These monorail trains, manufactured in the United Kingdom, can drive at short intervals thanks to Alstom’s communications-based train control solution.

The construction for Cairo’s monorail project was awarded in 2019 to a consortium comprising Alstom, Orascom Construction and Arab Contractors for 2.7 billion dollars. The Alstom-led consortium will operate and maintain the system for the coming 30 years.

Once hailed as the transport method of the future, monorail systems have mostly been rolled out in theme parks or across short distances. Up until a few years ago, longer monorail systems only existed in Japan. In recent years, the monorail has been making something of a comeback in China, especially in Chongqing and WuHu.