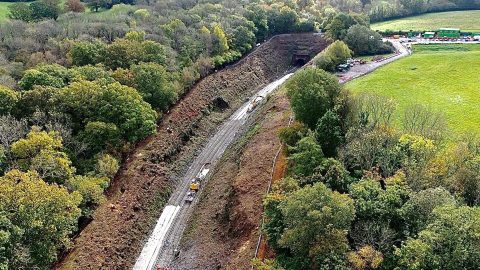 Network Rail will get to work on the Tunbridge Wells to Hastings line later this month in a bid to make improvements to the earthworks on the line, which runs through the counties Kent and East Sussex. The line has suffered from reliability issues for more than 170 years.

“We’re finally able to deliver sustained investment in this railway’s civil engineering, really for the first time since it was built”, Fiona Taylor, Network Rail’s route director for Kent, says about the works. “When the engineers of the 1850s cut the tracks through the hills, they cut deeply and cheaply, leaving a legacy of unstable earthworks that have a history of collapse.”

Network Rail was faced with major landslips as recently as December 2020. There was another major incident back in 2014. In recent years, the infrastructure manager has installed so-called movement sensors along the route to monitor locations at risk. One-such location was Wadhurst, where improvements to the earthworks were carried out one year ago.

The improvements to the line are an ongoing process. The first phase was completed in October 2021. The current phase will kick off on October 22 and will last for a week. In addition to earthworks, Network Rail will also be installing a new set of tracks in the Wadhurst Tunnel and carry out repairs in the Moutnfield Tunnel.

Network Rail teams will revisit the route again in April 2023 for the third and for now final phase of the project. The infrastructure manager expects to be carryout similar works as during the first and second phase.

Still, railways remains, by far the safest and most energy effective – on shore device…
Devices, however – now handsomely rewarded – and optimal – all prove:
Redundant,
Resilent and
Robustness!
R:s, above urgently shall be attended at railways – by a now optimal upgrading!
(“Standards”, currently, regrettably, just is “cementing”.)
Predictive, “optimal maintenance”…, cover up of symptoms, but does not make Industry the needed, a device optimal 2022!…