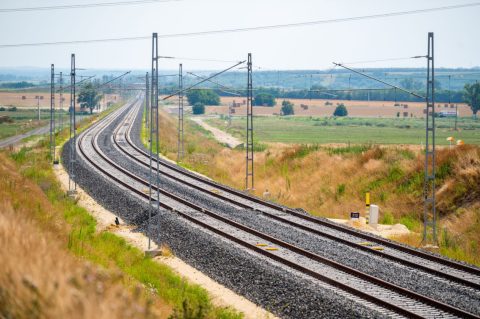 Hungarian track access charges could be reduced by 40 percent

The Hungarian government has proposed a 40-percent reduction of track access charges on the national railway network. This would be realised by a temporary cancellation of the surcharge, which is an additional fee to be paid when using the rail infrastructure.

The Hungarian railway sector needs urgent help, as it has been dealing with high energy prices and several other setbacks in the past few years, explained Dávid Vitézy, the State Secretary of Transport at the Ministry of Technology and Industry in a Facebook post. The ministry would cover the surcharges with the income it has generated from the carbon dioxide trading system, he explained.

“The direct costs plus surcharge paid by private, typically freight-carrying railway undertakings in Hungary totals 22 billion Hungarian forint. Of this amount, the surcharge was a burden of around 40 percent; according to the 2021 data it was exactly 39.2 percent”, explained the state secretary. “Thus, the cancellation of this fee will greatly contribute to making rail freight transport competitive.”

The ministry already supports the passenger market in this sense by reimbursing the additional costs. For freight, it is planning to compensate for the surcharge with the income it has generated by trading carbon dioxide quota’s. “We are talking about 8-9 billion Hungarian forint per year as a whole”, Vitézy added.

“Countries and companies receive a quota for the amount of greenhouse gasses they can emit. If they emit less, they can sell the difference to others who emit more. In Hungary, a significant fund is formed from this source. On the railways, we are already financing single-car transport to make it competitive with road freight from 2021.”
Much-needed measure

Although it still needs to be approved, the industry highly welcomed the measure. “The timing is very important, as companies have already started their price negotiations for the year 2023. We hope that the detailed rules will be published as soon as possible”, commented Lajos Hódosi, Managing Director at Hungarian rail association HUNGRAIL.

However, it must not be forgotten that railway undertakings in Hungary are currently facing dramatic increases in energy prices. “Is such a large amount enough for rail freight transport, which has to bear a tenfold increase in traction energy costs?”, commented Akos Ersek from the UIRR on LinkedIn.

The topic will be discussed during the webinar about Hungary’s rail freight potential on Friday 30 September 2022. During this free-of-charge webinar, several experts will talk about the energy crisis in the country, infrastructure upgrades and the new state-of-the-art terminal of East West Gate on the border with Ukraine. You can have a look at the webinar programme here, and register here.