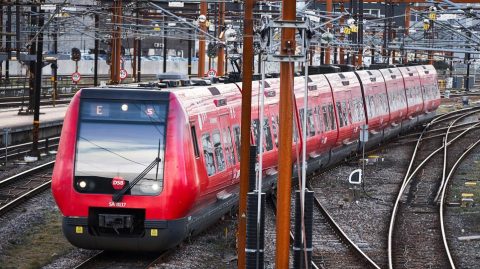 Banedanmark has put a new signalling system into use on the three remaining section of the S-Bahn lightrail system in de Danish capital of Copenhagen, the infrastructure manager said on Monday.

With the new signalling system Communications-Based Train Control (CBTC), Banedanmark hopes to increase the reliability of the S-Bahn network in Copenhagen, which had become prone to errors and thus cancellations using the old system. That said, the infrastructure manager does not rule out teething problems of the new digital system in the coming days.
The switchover to the new signalling system began back in 2016. The first section to be overhauled was the Hillerød-Jægersborg one, where the oldest signalling system was in use. In fact, it was a simplified version of an already dated ATC system.

“We need even more people to board our S-train. This will only happen if we keep working for both better and more trains. The new signal system on the S-Bahn network is the prerequisite for this to become a reality. They must ensure greater punctuality – and reduce the errors that have caused frustration for passengers over several years”, Transport Minister Trine Bramsen said on the completion of the project.

“With the new signaling system, passengers on the S-Bahn can look forward to more stable operations. It is a comprehensive upgrade that will benefit passengers in the form of fewer signal errors and a better flow of traffic. Thus, the S-train will in the future be an even more attractive form of transport, and it is an important step in the efforts for a green transition and less congestion”, Banedanmark’s director of signalling Janus Steen Møller added.