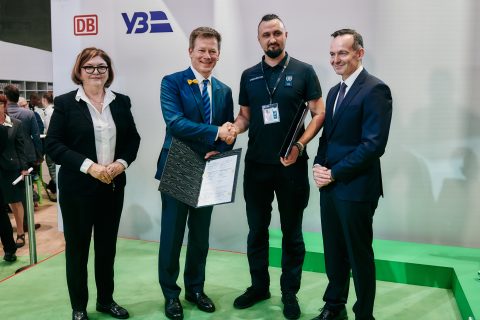 Deutsche Bahn (DB) has signed a memorandum of understanding with Ukrainian Railways (UZ) for long-term support during the eventual post-war railway reconstruction effort.

The MoU signed on Wednesday also includes consulting services and the introduction of European standards for rail operations and management. The latter is a prerequisite for receiving the financial aid required for the reconstruction effort.

However, the main focus is on improving rail freight and the expansion of freight corridors and terminals. DB and UZ will streamline the handling of freight between the broad gauge and standard gauge. The companies will also examine the use of so-called hopper wagons in order to export agricultural produce in greater quantities.

“We follow with the greatest respect how our Ukrainian colleagues do their work reliably and courageously under wartime conditions. For millions of people, the railway is the only means of transport, for the economy it is the most important lifeline”, DB CEO Richard Lutz said upon the announcement of the MoU.

“DB’s professionalism and consistency, coupled with Ukrzaliznyzja’s courage and motivation, is a powerful combination that can bolster the European modal shift to rail”, UZ’s Alexander Kamyshin added.

UZ has been the poster child for the Ukrainian resilience and perseverance in the face of Russian aggression. It has enabled the evacuation of displaced people and has been instrumental in the movement of vital goods.