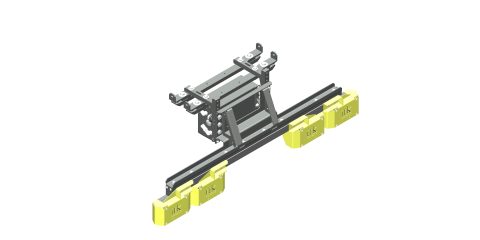 Train localisation and detection systems such as a balise or axle counter tend to function just fine. But they come with a lot of costly installation work. And because these components are installed across vast distances, maintenance is time-consuming and necessitates the closure of a track. For these reasons and others, international technology company ITK Engineering is developing an onboard train localisation solution.

ITK Engineering is working on the so-called Magnetic Railway Onboard Sensor (MAROS) using a cylindrical coil. These coils are then fixed to the locomotive above the rails. In simple terms, the interaction between the train and the rails as it moves along the track results in a certain fingerprint or signature.

“Our system works similar to a music identification platform. We compare a section of a signal type with a known library and use the additional information contained there. In this case, it is not the song and performer but the position in the rail network”, ITK’s Florian Schramm explains.

The physical basis of the comparison, however, is not an acoustic sample, but the ferromagnetic properties of the rail material. This is not measured via a microphone but via a coil. The comparison is not done in the cloud, but locally on the train. The phase shift between voltage and current is determined as a signature. This means that this pattern or fingerprint is available along all rails and can be recorded with simple sensors.

“By applying an alternating voltage, a magnetic field is generated at a coil whose polarity changes periodically. Here, the magnetic field penetrates, among other things, ferromagnetic materials that are in the environment (e.g. below the coil) of the coil and thus change the permeability of the coil of each sensor. This in turn leads to a change in the coil inductivity or a shift in a phase angle. The measuring principle of the sensors is based on the precise measurement of the phase angle between the applied voltage and the current at a coil”, Schramm adds in more detail.

Right now, this rail section information ‘library’ does not exist. At least not yet. For that to happen, a measurement train will have to run the full course of a certain track first. Without that information, the system won’t work, says program manager Tobias Hofbaur. This sounds like a time-consuming effort, especially if you want to ‘map’ the whole of Germany for example. But, as Hofbaur points out, most infrastructure managers need to carry out regular inspection runs once a year anyway. Those inspection trains could be fitted with the sensors.

At this point, you might be thinking: why not fit trains with a Global Positioning System (GPS or the Global Navigation Satellite System (GNSS)? The answer is quite simple in that these systems are not reliably and safe enough for railway operations. “Despite the usually high accuracy of the GNSS, there is insufficient availability for rail applications, at least for higher safety integrity levels (SIL).

In addition, these systems are subject to the difficulties related to Navigation Warfare (NAVWAR)”, Schramm says. NAVWAR includes distorting satellite navigation related signals, as well as jamming and spoofing of communications. “The advantage of our localisation solution is the independence from other systems outside our influence. This makes our solution ideal for safety critical applications”.

The principle of position determination via a coil was developed by the University of Karlsruhe. ITK’s founder is a graduate from the institution and the company’s main office is situated not far from the site. ITK and the university also share a common innovation lab for other projects.

“We got word of PhD research in this field around five years ago and it caught our attention. We wanted to know if a rail application would be possible, and this started the ball rolling. We are working together with the university and are currently developing the technical implementation for use in the rail sector”, says Hofbaur.

Market-ready at the beginning of 2025

According to Hofbaur, the MAROS is now in the proof-of-concept phase. There are already initial test
series that the company is using as a basis for further development. On top of that, further, more
extensive measurement campaigns are in preparation, Schramm adds.

ITK Engineering aims to have the localisation solution market-ready at the beginning of 2025”,
Hofbaur says. Anyone who would like to see the prototype of the Magnetic Railway Onboard Sensor
(MAROS) live can do so at Innotrans in Hall 20 at Booth 320.