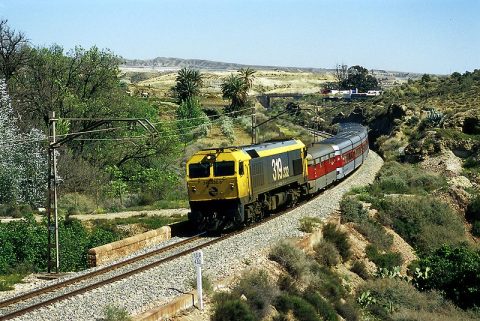 Spanish infrastructure manager Adif will switch the Granada-Almería section of the Mediterranean Corridor to the European standard gauge, as well as electrify the line and implement advanced signalling and communication systems. Last week, Adif president María Luisa Domínguez and Xavier Flores, general secretary of Infrastructure presented the results of a study on the section.

The section is part of the Antequera-Granada-Almería line in the south of Spain and part of the Mediterranean Corridor of the Trans-European Transport Network (TEN-T). The upgrade of the railway line section should create a valid alternative to transport of goods via road. This is because transit times for rail transportation will be significantly reduced and therefore more appealing.

The total investment for the Granada-Almería section exceeds 615 million euros. An additional 307 million euros will be allocated for renovation works on four sections, which should reduce transit time even further. The sections involved are Iznalloz–Moreda, Moreda–Huélago, Huélago–Benalúa and Fiñana–Gérgal.

The Adif study confirmed the compatibility of the infrastructure with the possible reopening of the freight rail transport service for the Alquife mines in Almería.

This article first appeared on RailFreight.com