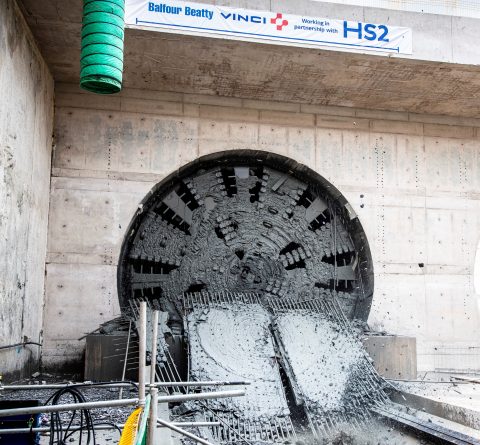 Tunnelling activities began in December of last year, with teams working around the clock. Contractor Balfour Beatty had some 400 people on site for the job. Over the past seven months, they’ve been instrumental in installing 790 concrete rings already. These rings consist of eight two-metre-long segments each.

“This is a historic moment for the HS2 project, and I’d like to congratulate everyone involved in delivering it. The 400-strong team, including tunnelling engineers, TBM operators and constructions workers at both portal sites, have pulled out all the stops to achieve this fantastic milestone”, HS2 ceo Mark Thurston said.

The TBM, named after Dorothy Hodgkin, the first British woman to win the Nobel Prize in Chemistry, will now be disassembled and transported back to the North Portal. There, it will be geared up for the second bore under the Long Itchnigton Wood. This ancient woodland is a Site of Special Scientific Interest due to its complex ecosystems.

Tunnel boring machine (#TBM) 'Dorothy' has completed our first breakthrough at Long Itchington Wood #Tunnel. We will be posting further updates throughout the day, keep your eyes peeled. 👀 #tbmbreakthrough pic.twitter.com/buEGTG6jw4