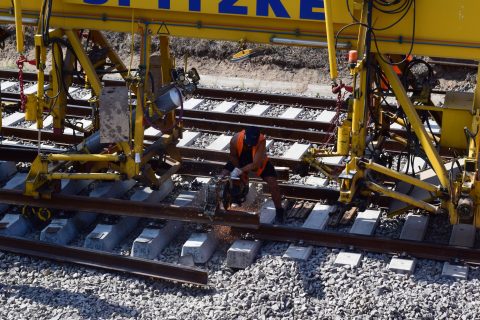 The German federal budget for railways that was approved by the Federal Cabinet on Friday is “not even enough to absorb the increase in construction costs for the rail infrastructure”, says the non-profit transport alliance Pro-Rail Alliance. The organisation stresses that it expects more from the newly established government, which promised to put rail before road when it took office last November.

Around 3,86 billion euros is earmarked for or the construction and expansion of roads, almost twice the amount set aside for the railway network. Although the budget is only final after parliamentary consent has been reached, the current draft is nothing better than what was presented in May this year, according to the industry group Allianz Pro Schiene. At that time, they also fiercely criticised the way in which rail was prioritised, or rather not prioritised in comparison with roads.

“The second government budget is also disappointing. Just like the first one, it bars the way forward in transport policy”, complained Managing Director Dirk Flege. “Just like the previous governments, this coalition is focusing on the construction of new roads and is neglecting future investments in the rail infrastructure.

Pro-Rail Alliance referred to the rapidly increasing demand for goods transported by rail and the boom in passenger transport triggered by the 9-euro ticket. “The draft budget slows down demand on the infrastructure side. Central future issues such as the digitisation and electrification of the rail network continue to languish in the financial planning of the federal government”, said the Pro-Rail Alliance managing director.

The disappointment coincides with a period of intense construction work on the railway network in Germany. Although these words cause a lot of disruption and frustration, they are also considered very needed to be able to cope with the growing demand for rail freight.

The German federal government took office last November, and one of its first manifestations was that it would invest in rail “considerably more than road”. The coalition government’s objectives were to lower infrastructure fees, accelerate Digital Automatic Coupling, strengthen single-wagon traffic, and promote combined transport terminals.

The federal government had stated that infrastructure investments were a key political priority and that substantial amounts would be invested in it. However, the government’s budget committee proceeded with some budgetary adjustments that did not meet the initial commitments.

Just a minority now afford luxury of not caring about JIT.
(Electrification, yes, but timely and a track, simply safely sustainable in x-, y- and z dir., thus a low noise, etc., etc., now is the timely. and worth investing at.)
Safely limited, safely calculable – and low forces – safely provides for added allowed axial loads and speed – and for reducing of costly maintenance, simply for low costs.
High quality pays and for sake of all, now is the urgently requested…

Regrettably Industry, a vital part of society, now is at the mercy of taxpayers.
Luckily then, voters now, uniquely, are in a pro rail mode and
ware owners, clients have shifted strategy to On Demand, thus low risk, high quality supply chains now handsomely is rewarded, by willingly paying clients – and vice versa…
For Industry, simply just remains, to offer high quality… (Clients should not be the blamed, neither taxpayers should…)
Quality pays and at transports now more than ever!

It could be said this applies to the four-year period 2022-2025. If road had more in 2022 and still would get more in 2023, road investment would have to fall to zero to comply with this commitment in aggregate.