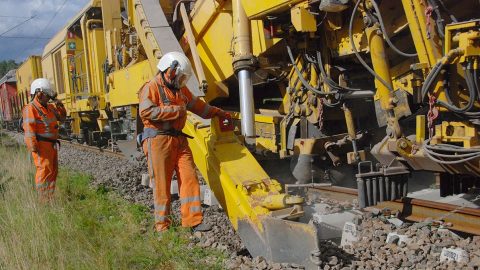 Track closures in the Netherlands might no longer have to take place at the weekends only, but could in the future include work carried out on weekdays. In time, work on weekdays could even take over. ProRail is currently investigating the possibilities. Robert Degenhart and Frank Knottnerus of ProRail explained the choice at RailTech Europe 2022.

The reason ProRail is investigating organising the track closures outside of the weekends is to give railway construction companies more scope to plan and carry out the work. A train route is currently out of service every few Sundays, but in the future that could also be on a Monday, Tuesday or Wednesday.

Scheduling the closures during the week allows contractors to choose their own schedules. Knottnerus: “There is a limit to this, you don’t want to eat up the market’s capacity. ProRail’s ambition is to ultimately schedule 53 percent of the closures during the week versus 47 percent at the weekend. But that’s the most favourable starting point, you still have to take into account different sections of track.”

’30 to 40 percent increase in railway works’

According to ProRail, the expectation is that the total volume of track work will increase by 30 to 40 percent in the coming years. “However, the capacity of track works is finite”, Knottnerus said. “We are trying to put together a national puzzle to arrange all the work on the track”, Degenhart added.

Knottnerus cites the northern lines in the Netherlands as an example that it is possible to carry out track work outside the weekends. “The first tenders are already underway between Leeuwarden and Groningen with regard to freedom of choice for contractors. We are going to work on the northern lines during the week as much as possible and not at the weekend. It requires different thinking, of course, but it can be done.” Degenhart added: “Not all routes can be done during the week, like Groningen and Assen for example. But we are happy to look at opportunities where it is appropriate to carry out works during the week”.

“We are looking at how we can work on the track with minimum disruption. During the week, we can also work with a Sunday timetable for a number of days. We are also investigating whether intercity trains, for instance, can be used during works, while local trains cannot”, says Knottnerus.

For a timely Old Railway, sooner the better, now an offensive shift has to be performed!
All other devices upgrade for higher load capacity, for lower costs. (For reduced track charges, for a timely quality of service rendered, so has the railways!)
32, 5 ton axial load now should be min. etc.
Quality pays and at transport devices, now more than ever! Benefitting pf current pro rail era at voters, etc., with start at the prime lines, within 10 years the shift can be performed – and paid for…