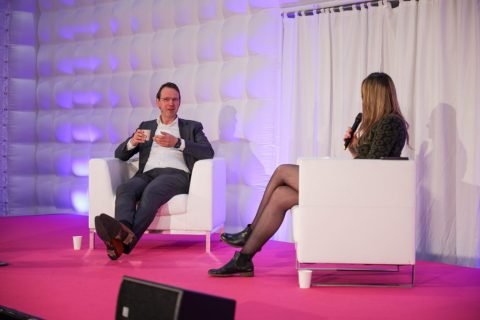 Despite busy Dutch network, there could be many more international train departures, says ProRail CEO

The Dutch railway network offers a lot more potential for long-distance passenger trains, John Voppen, CEO of infrastructure manager ProRail, said at RailTech Europe 2022. According to Voppen, the current infrastructure allows for around 20-30 percent more long-distance trains. These are not exact figures, but an estimate based on the current offer, he emphasised. “But the existing trains are sometimes fully booked, so the demand is there.”

The railway network in the Netherlands is very full, yes. But it is in the way trains paths are organised, Voppen explained. “We basically copy it throughout the day, more or less. If the Eurostar goes in one hour, you can have the Eurostar in every hour, and often even every half an hour. You can calculate how many more Eurostar services that could result in”, he noted.

The Eurostar service to London departs three times per day from the Netherlands. In theory, this would mean that in a timespan of 12 hours, the train could depart nine more times.

Hard to hop on, especially for the small operators

However, it is not just that simple. There are many challenges on the way, he admits. “Investments in trains are huge investments, and these come with huge risks, as you cannot be certain that the train will be fully utilised. Rail operators need support to take these risks, especially the smaller companies.”

The smaller companies are facing additional burdens, as the market is dominated by large players, which plan their journeys ahead of time. There is not always room on the network for the smaller parties, Voppen admits. “Especially with the copy-paste concept, where we duplicate the timetable per hour, does not provide room for new entrants.” According to the CEO, the network would benefit from more flexibility, where shorter-term train path requests could be made. This would require new regulation, on a European level.

Luckily, there is a development where timetables are redesigned on a European level. Timetable Redesign, as the project is called, would harmonise train paths on a European level to allow for much more efficiency in the way existing capacity is used. “If we would have a European timetable, the Eurostar could win 20 minutes in time, without any investments in the current infrastructure.”

This is a very gradual process, one that frustrates at times, Voppen admits. “Just as you would wish that everyone could speak English in Europe, such changes that sound so simple do not happen easily. Other than aviation, which was born as a global product, rail started as a regional product. Every country does it in his own way. But we need to do it in a European way.”

Of course, it is also about the passenger. There is still very little tendency among the citizens of the Netherlands, or Europe, to take a holiday just by train. But also this can be changed with the right measures, Voppen believes. “It needs to be made much less complicated.

“I am taking my daughter as an example. She graduated from high school and wanted to go on a trip to Barcelona. I promised her that I would pay for her school if she took the train. I almost got her there, but booking a ticket proved to be so complicated that she ended up taking a flight. And there I was, at an extremely busy airport with long waiting lines.”

Currently, the queues at Dutch airports are so long, that the train to Berlin would win over the flight to the same destination”, he jokingly said. But the comfort of booking a flight and having a smooth journey continues to attract the passenger. “There is little space for luggage in the train. It is not easy to travel with a dog, let alone children. We cannot ask people to take the train instead of a flight without improving such conditions.”

All of this having said, there is one important and maybe decisive factor in making the choice for a flight instead of a train. “Flights are currently ridiculously cheap”, said Voppen. “If the government is taking climate change seriously, it needs to make sure that flights are becoming more expensive.”

But a lower price for international train journeys? Voppen was less explicit about that. “I think the price will change a little”, he said, but he did not foresee a 9 euro ticket such as in Germany this month being applied in the Netherlands.

“I am currently lobbying for price differentiation, which means that tickets can be lower in price at certain times, when we have space for more trains on the network. At peak hours, the tickets could be more expensive. This would allow us to use the network much better, but it goes against the policy aim of having the same product available for everyone.”