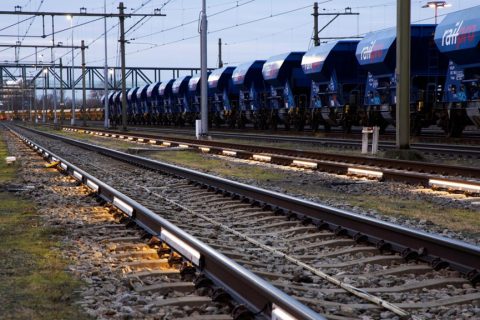 “Installing RailLight® in railway yards has great advantages: no light pollution, improved safety, up to 80 percent savings in energy consumption and costs, and lower CO2 emissions,” says Peter Mars, export manager Europe at Triolight, the company behind the innovation.

“Light towers and tension cables in railway yards cause enormous light pollution. This increases resistance from local residents and can have a negative impact on the ecosystem”, says Mars.

What is unique about RailLight is that the luminaire is installed on the outside of the rail. “The advantage of this is an effectively illuminated safety path. The floodlighting of the luminaire avoids cast shadows on the tracks, which increases the safety of personnel,” says Mars.

Because RailLight is mounted on the outside of the rail, the voltage does not have to be turned off. Tracks do not have to be shut down, and there is no need to hire additional machinery or manpower. “As many as 100 luminaires can be installed per person per day, which is very cost-effective. Furthermore, the luminaire is very easy to disconnect and reuse”, says Mars.

“Voestalpine is enthusiastic about RailLight”, indicates Bob van Tiel, Sales Manager Netherlands at Triolight. Voestalpine about RailLight: “Working in the dark is not always preferred. Yet you can hardly escape it in the rail infrastructure. The visibility on tracks is, especially in the winter months, often poor. In order to ensure that colleagues can work safely and the environment has little or no problems with light pollution, we have entered into a partnership with Triolight. With the RailLight product, we have another great addition to our constantly growing portfolio”.

In homecountry the Netherlands, RailLight has been approved by ProRail and Dutch Railways (NS). RailLight is also well received in Europe. At the request of the SBB, a test was carried out with RailLight on a remote section of track in Switzerland. The purpose of the test was to assess the staff’s experience with RailLight compared to lighting columns. A survey carried out afterwards showed that the staff were predominantly positive about RailLight.

In 2021 RailLight won the public award at the RailTech Innovation Awards. Since the introduction of RailLight, various projects have been realised in the Netherlands and France. Several mock-ups have also been made for England, Switzerland, Austria and Belgium.

Triolight is one of the exhibitors at RailTech Europe from 21 to 23 June in the Jaarbeurs Utrecht. On stand 7.019 you can see the product including its attachment to a rail and learn all about the business case. Register here for free for the exhibition.