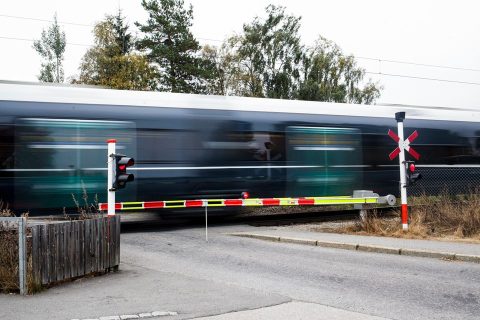 Published on 10-06-2022 at 11:25
In Norway, Nordbyvegen level crossing at Jessheim is the place where most incidents and near misses occur. Photo: Adrian Nielsen, Bane NOR

On Thursday, railway companies worldwide called attention to level crossing safety in light of the international level crossing awareness day (ILCAD). The annual conference, spearheaded by the International Union of Railways (UIC), was held in the US city of Denver this year.

On level crossing awareness day, Norwegian railway manager BaneNOR published a list of the country’s level crossings where the most accidents and dangerous situations occur. “It is only just over a week since the tragic accident in which a young man lost his life on a level crossing in Midtre Gauldal in Trøndelag. It’s awful when such incidents happen. We will work to reduce accidents at level crossings”, says Pål Buset, project manager at Bane NOR. Nordby near Jessheim (top image), Larvik, Tønsberg and Røros are the sites where most accidents and near-misses occur, following violations and errors from road users.

“In almost 99 percent of accidents, the lack of attention on the part of road users is the problem”, wrote Austrian Railways ÖBB on the awareness day. “The stopping distance of a train is ten times that of a car – sometimes even more. Therefore, it is usually not possible for a train to stop in time in front of an obstacle”,  On average, 25 level crossings are closed each year in Austria to improve safety. Last year, 40 level crossings were closed, more than the long-term average.

In Lithuania, safety campaigns with road police officers and employees of Lithuanian Railways (LTG) were held at the level crossing awareness day at the most dangerous level crossings. Also, a general lesson on safe behaviour at the railway was held in schools. The most frequently observed violations in Lithuania are disregarding road signs or traffic lights at level crossings, attempting to cross the railway out of place, and pedestrians listening to music while crossing the railway.

Reducing the number of level crossings is one of the ways to reduce accidents, since warnings lights can be overseen and even barriers can be ignored. In Spain, Adif invested more than 38 million euros between 2018 and 2021 to eliminate or improve level crossings, with the closure of 200 level crossings and the improvement of protection of another 14 with the installation of light and acoustic signalling. The current plan is to remove 299 level crossings in total out of the 2,996 level crossings the country has.

In Italy, the recent restructure of FS Group means that railway manager RFI and road infrastructure manager Anas will now be under the same branch, which will integrate the rail and road networks better, also at level crossings. The number of level crossings in Italy is steadily decreasing with closures,. While there are now 137 less crossings compared to 2019, the data on accidents has not decreased. This year, the elimination of an additional 100 level crossings (57 of which are to be delivered to private individuals) and the construction of alternative road works for a total investment of around 50 million euros are planned. “The goal is to double the number of level crossings that are closed every year”, says Chiara De Gregorio, Head of RFI Programs for level crossings.