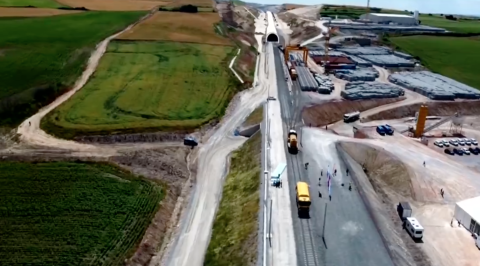 The Turkish ministry of Transport and Infrastructure and local authorities held a so-called first rail welding ceremony earlier on Wednesday for a new high-speed line and freight connection across the European part of the country.

The new high-speed line will connect the towns of Edirne, Kırklareli and Tekirdağ to the existing line originating at Istanbul’s Halkalı station. For freight trains, the project means a direct connection between Halkalı and Kapıkule, the border gate to both Greece and Bulgaria.

Once the work is completed, passenger train services will take 1,5 hours instead of 3,5. Capacity on the section will increase fourfold, the ministry also said.

The rail welding ceremony was attended by Minister of Transport and Infrastructure Adil Karaismailoğlu, the Head of the European Union Delegation to Turkey Ambassador Nikolaus Meyer, as well as AK Party Edirne Deputy Fatma Aksal. “With this project, Edirne will go beyond being our gateway to Europe and will be the most important pillar of the Iron Silk Road”, she told local media.