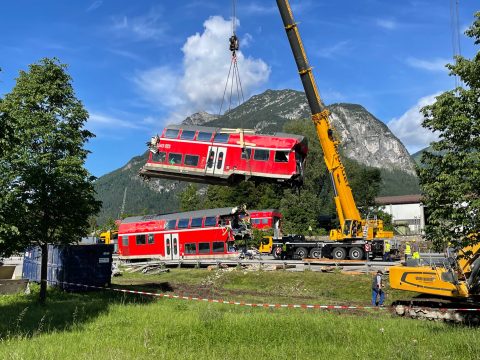 The death toll of train derailment in southern Germany on Friday has risen to five, Deutsche Bahn (DB) and local authorities reported over the weekend. The efforts to remove the stranded train cars at the site near the famous alpine town of Garmisch-Partenkirche continue.

Infrastructure manager DB Netz on Sunday deployed a special rail crane with a lifting capacity of 250 tonnes to assist the three road cranes already present in lifting derailed wagons. On Friday, three double-decker train cars overturned for reasons yet unclear. For the lifting effort, the carriages were partially disassembled and cut in half. The removal works are expected to be completed later on Monday.

Only after the track has been cleared will DB be able to make a complete damage assessment, the company said. For this reason, DB cannot at this point say when the section between Garmisch-Partenkirchen and Oberau will be reopened.

“Everything is being done to help those who were injured, to whom we wish a speedy recovery,” German Chancellor Olaf Scholz said shortly after the incident. “Our thoughts are with the relatives.”