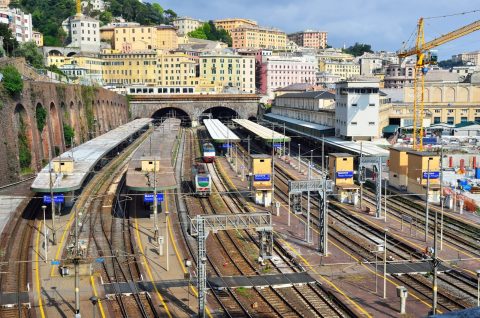 The Italian FS Group recently presented its industrial plan for the coming decade. Record numbers show the commitment and the long-term vision adopted. Will this be the long awaited infrastructural shock, or just a utopian grand plan?

In the next 10 years, 110 billion euros will be invested in Italian rail infrastructure. The 2022-2031 industrial plan of FS Italiane was the first main action of the board of directors elected in June 2021, and presented in Rome on the 16th of May. The objectives are ambitious: promoting a collective and sustainable multimodal transport network focused on highly integrated transport hubs, doubling the rail freight transport shares, and self-producing 40 percent of FS Group’s energy with renewable sources by 2031. The state-owned company promises 40.000 new hirings and estimates benefit for the country’s GDP between 2-3 percent.

The investments represent a concrete effort in connecting the country more efficiently and narrowing the gap between the north and the south of the peninsula. However, the fear that many have in a country that has notorious difficulties in building infrastructures, is that this could be just vague promises. But given the recent positive improvements of FS, the story could turn out to be different.

A “new time” for new transport

The new plan presented by FS has introduced radical changes in relation to the previous industrial plans. Not only are the numbers and the objectives extremely ambitious, but also the new structure adopted can be seen as a groundbreaking step towards a more modern and integrated company. It is therefore no wonder that FS is marketing this 10-year long vision as “A new time” (“Un tempo Nuovo” in Italian), intended as the beginning of a new era for the group.

Compared to the previous industrial plans, there are some important differences to consider. First of all, the amount of investments put into place has never been seen before, with 190 billion euros in total, which are more than double in relation to the last 10 year plan published in 2017. These resources are a combination of different national and European funds, like the Italian recovery plan following the Covid-19 pandemic, and allocated to rail infrastructures specifically 110 billion euros for the period. Furthermore, 40.000 hirings on top of the current 80.000 employees means huge expansion and turnover potential.

The second significant difference is in the long-term vision. It has been usual practice at FS Group that every new board publishes a new industrial plan, limiting the effort to the short 5-year time span, and neglecting the long-term vision. Only in 2017 the first attempt to have a broader planning horizon was made, but after only two years the change of the board brought the group to a new plan. This time it is different however, first because European investments are bound by strict deadlines and rules, under penalty of withdrawal of funds. And furthermore, because the plan is also backed by a 10 year long investment strategy recently published by the Italian Ministry of Transportation, which confirms the amount and nature of the investments. This might reduce the political influence on the actual implementation.

More than half of the FS Industrial plan’s resources are reserved for rail infrastructure. This unprecedented amount of money will allow to fund most of the important projects the country has been waiting for a long time. Among these are the Turin – Lyon, crucial connection between the Italian high-speed rail network and the west European high-speed network, but also the competition of the northern high-speed section to Venice and the construction of the initial part of high-speed line to the most southern region of Calabria.

This plan represents an incredible opportunity for Italy, but in a country where bureaucracy and bad governance have always affected public investments, many remain sceptical. Some encouraging signs can be seen, given that the plan is very well structured, many construction sites are already operating and most of the money is also controlled by the EU. Therefore, the hope is that the schedule will be followed and that the promises made on the 16th of May can become reality. Ten years to transform Italy, a challenge that must be taken for a more interconnected country ready for a sustainable future.

“A new era” will call for investments, however not for “cementing”, at “state of the art”, but for a “New Old railway”.
Compare, how the global devices, by air and by sea, for sake of lower costs, upgrade for higher load capacity!
Current 22,5 ton, standard, has to be shifted out. 32,5 now should be min. Resilency (robustness), readiness for ensured performance has to be ensured!
(Electrification, yes, but not a vulnerable, but a robust, etc., etc.)

I wonder if new night train rolling stock is part of the investment plan, and if yes, if that includes such trains that are capapable to operate on the LGV network in France for connections like Paris – Rome and Amsterdam – Milan. Domestic operations (operating on the north-south high speed rail for some part of the route) and links on mixed-use railpaths to Switzerland, the Rhine area in Germany and to Berlin would also be meaningful.