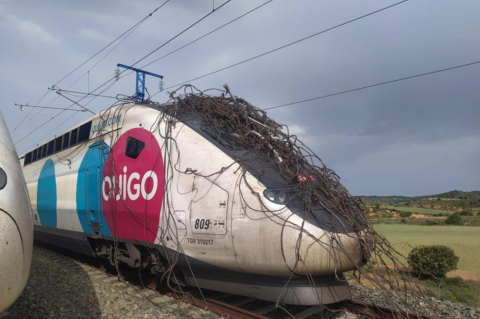 A Ouigo train travelling from Madrid to Barcelona ripped off several hundred of metres of overhead line from the high-speed railway line on Saturday, causing major delays for thousands of passengers.

The incident happened just around 15.00 in the afternoon at some 25 minutes outside of Zaragoza. While infrastructure manager Adif has yet to complete its investigation, preliminary reports circulating in Spanish media suggest that an overhead line had become detached.

The evacuation and transfer of passengers from the site of the incident took around three hours. Because Adif had to cut power on the line, another Ouigo train became stranded at Cetina station. The one-hour wait on board the train there was particularly stressful, as passengers took to social media to complain about the lack of airconditioning amidst scorching temperatures. In Zaragoza, confusing announcements sent many travellers up and down the platforms, causing further tension and irritation.

The stoppage in the end affected 25 trains, including 20 Renfe trains, and at least 8,000 passengers suffered delays as a result .

“Electrification”, yes, but a timely! It is 2022 now and clients, ware owners, etc. have shifted to “On Demand”. At transports, “On Time”, high quality, is more important, than ever.