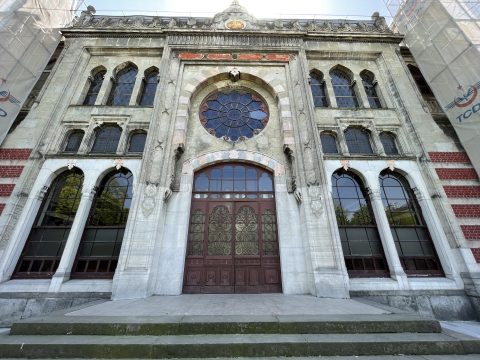 Thursday, May 19 marks 45 years since the arrival of the last Orient Express at Sirkeci Station in Istanbul, Turkey. While Istanbul wasn’t the first destination of this legendary train service nor the last, it remains to this day the destination city most associated with the Orient Express. RailTech.com visited what remains of the legendary railway infrastructure.

Sirkeci Station has long gone quiet. Even the renovation works have been stagnant for years, which means large parts of the iconic building have slipped into a state of disrepair. Outside, the tracks have been removed. Work to install new tracks has been progressing at a snail’s pace.

Eclipsed by a commuter train

Few glimpses of grandeur remain, such as the waiting area and the grand hall. The restaurant is still there, too. But like the station itself it receives few visitors.

Large numbers of people still move in and out of the nondescript hall that was added later to get on the Marmaray, Istanbul’s commuter railway line under the Bosporus that connects the European side and Asian side of the city. For these commuters, Sirkeci is now an anonymous dot on one of Istanbul’s many public transport lines, which also includes trams, metro and bus.

Reputation holds to this day

The situation at Sirkeci Station is far removed from the grandeur and opulence people most associate the Orient Express with. And the reputation of the iconic service holds to this day, as evidenced by the eye-watering figures that travel company Belmond’s label Venice Simplon-Orient-Express charges for its six-day, once-a-year recreation of the legendary journey: 17,500 pounds (21,111 euros). Needless to say, this year’s train service, which departs in August, is sold out.

But even at the turn of the previous century, the Orient Express was expensive. A ticket back then would have set you back the equivalent of more than 3,000 euros. That is roughly comparably to the price of a business class airline ticket from Paris to Dubai with Emirates.

Part of the reason why Istanbul stuck as a destination is the representation of the Orient Express in popular culture, most prominently in Agatha Christie’s 1934 novel Murder on the Orient Express. Legend has it she wrote parts of the story from ‘her’ room 411 at Istanbul’s Pera Palace Hotel.

When it opened in 1895, it was the first hotel in Europe to feature an elevator. In Istanbul itself, then still known as Constantinople, the Pera Palace hotel was the first building other than an imperial palace to have electricity. It also had hot water and radiators for heating.