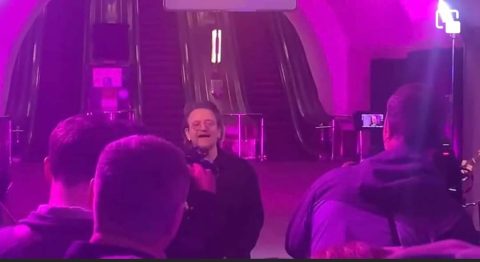 U2 singer Bono and guitarist The Edge have paid hommage to Ukrainian Railways and their efforts in getting citizens to safety. The artists made their comments in a video on board a train following a surprise concert in a Kyiv metro station earlier this month.

The video was shared by Ukrainian Railways chief Alexander Kamyshin on Twitter on Wednesday.
“Thank you so much for taking us to safety. More importantly, thank you for taking so many people to safety over the past few months”, Bono said, adding that the Ukrainian Railway system and its people have performed “an extraordinary act of heroism”.

Bono and U2 are no strangers to activism, having thrown themselves behind important causes since the start of their careers. They are known to visit conflict areas, too. In 1997, the staged a concert in Sarajevo, a mere year after the siege by the Bosnian Serb army during the Bosnian War. For the occasion, trains were allowed in and out of the city for the first time in almost five years.

“You’ve saved so many lives and are heroes to all of us”, the singer concluded.

U2 guitarist The Edge said Ukrainian Railways’ efforts were “crucial for the level of resistance” that the country has displayed. “We thank you for your heroism”.

#HappyBirthdayBono. Sorry for being late, but I was a bit busy these days. You guys rock. #IronDiplomacy goes on. pic.twitter.com/F3XoMjT3xH

The band members were the latest in a string of high-profile visits to Ukrainian Railways this month. Earlier this week, speaker of the United States House of Representatives Nancy Pelosi was at one of the country’s stations. At the beginning of this month, Hollywood actress, director and UNHCR envoy Angelina Jolie visited the Lviv train station

Ukrainian Railways have attracted attention and applause since the start of the conflict. Trains have carried several high-level politicians to date, including European Commission President Ursula von der Leyen and High Representative of the EU for Foreign Affairs Josep Borell.