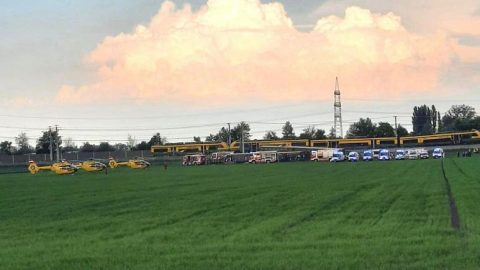 A train derailment in the Austrian municipality of Münchendorf near Vienna has resulted in one fatality and 12 injuries, ÖBB and several media outlets reported on Monday.

The Ventus train that derailed on the ÖBB network belonged to Raaberbahn, an Austrian-Hungarian railway company. According to reports, the derailment happened around 16.00 in the afternoon. It is not yet clear what caused the incident.

Images from the crash site on the Pottendorf line show a six-car train set. Two cars appeared to have tipped over and can be seen in a field next to the tracks. In a status update, ÖBB says that of the 12 injured, three are in serious condition.

According to ÖBB, there is extensive damage to the rail infrastructure. It cannot yet say how long repairs will take. Railway traffic is diverted and passengers are carried on replacement bus services. How long the service will stay in place also remains unclear.

Raaberbahn, in a statement on their website, have expressed their condolences to the family of the victim and all those affected. ÖBB has put out a similar statement.