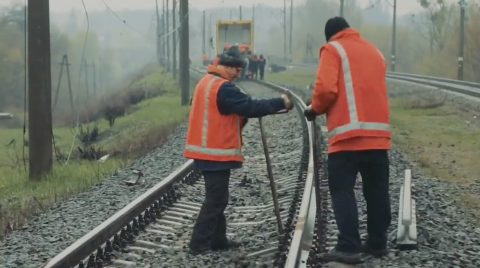 Some 200,000 Ukrainians on average still take the train on daily basis in war-ravaged Ukraine, where railway infrastructure is regularly targeted by Russian forces in an effort to cripple the country, a Reuters report published on Sunday shows.

“The longest delay we’ve had has been less than an hour”, Ukrainian Railways chief Alexander Kamyshin said in comments to the agency. He added that the Russians have yet to actually hit a military train. Reuters has not yet been able to independently verify his claims.

With the Russians having failed in reaching its maximalist objectives of taking Ukraine in a flash and installing a puppet regime, evidence suggest that the invading forces are now bent on destroying Ukraine’s infrastructure, deputy infrastructure Minister Yuri Vaskov was quoted as saying. He echoed previous statements the Ukrainian armed forces command, who said that the Russians want to cut off supply flows. Estimates are that the railways have carried more than 140,000 tonnes of food alone since the start of the invasion in late February.

According to Kamyshin, his teams work around the clock to ensure what ever damage is done, is fixed posthaste. Once they break it, we fix it. It’s all about hours, not about days”, he said about . He added that the focus of attention is rerouting the grain exports from the Ukraine’s southern ports to Poland, Romania and the Baltic states instead.

All the while, attacks continue. This month alone, six train stations were targeted in western and centrally located parts of Ukraine. On top of that, the bridge over Dniester Liman connecting Odessa and Besserabia came come under artillery fire for the third time in quick succession. Rail infrastructure in Dnipro was also attacked.

Reports suggest that Ukrainian Railways have lost 155 personnel since the start of the war, with another 155 wounded while on the job.