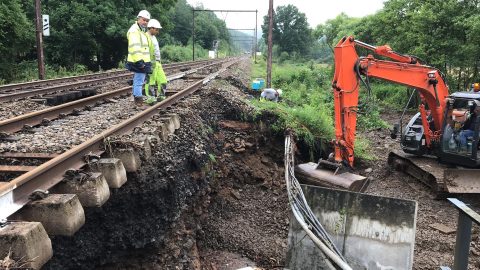 The lessons Infrabel learned from the flood: ‘We had never expected the rail embankments to become so unstable’

“The flooding of last year was the worst disaster we ever experienced on the Belgian railways”, said civil engineer at Infrabel Bart Kamoen at the RailTech webinar on Climate Change Adaptation. How did Infrabel deal with the aftermath and what is needed to make the railways more resilient?

In July of 2021, an enormous amount of rain fell in two days, after two months of extremely wet weather. In the narrow valleys of the Ardennes plateau, where all of the railways and roads are located, the water levels rose up to 4 to 5 metres. “The water took about everything on its way, including the embankments of the railway and parts of bridges, and with great costs”, says Bart Kamoen, civil engineer at Belgian rail infrastructure manager Infrabel.

Almost all railway lines in the south of Belgium were out of order. After about one and a half months however, trains could already run again on all of the lines. Three kilometres of track bed had to be rebuilt, four bridges and more than 2000 sleepers replaced and several kilometres of overhead lines rebuilt. The total costs of the repair works amount to up to 60 million euros for Infrabel.

In some areas, there are railway embankments of over 10 metres high. These embankments are historical, meaning they are about a hundred years old, explains Kamoen. They became unstable with the rising ground levels, and the ground tumbled down.

“A solution for the embankments was made on the spot by stacking large limestone blocks, which gave more weight to the foot of the embankments”, says Kamoen. These blocks were quarried on demand and delivered during the time Infrabel had to repair the embankments. In total, more than three kilometres of these walls were constructed. In case of another flooding, they can also help prevent erosion of the embankments.

The lines that were affected all date back to the end of the 19th century, and the existing abutments of the bridges were never replaced. “In Belgium we have the tendency to recycle the abutments and put new bridges on the existing ones.” The bridges are built the old-fashioned way, with wooden piles and brickwork abutments. “Some say that back in the day they made solid works, but I don’t agree with that, because it became clear that they cannot hold up against the water”, says Kamoen.

Work is needed to prevent riverbed erosion close to the tracks, but when it comes to this there is the problem of who is responsible. Normally the regions are responsible for the rivers but it is also a question of who takes the initiative and who pays, says Kamoen. “This is also one of the reasons why all of the old abutments have never been replaced”.

For the design of new bridges and embankments, better regulations are needed, says the civil engineer. Rising groundwater levels need to be taken into account, which is currently not the case for regulations of for example bridge stability. “The calculation method we used up till now was to add up to 1 metre to the groundwater level, but this is clearly not enough”, says Kamoen.

One of the important things Infrabel experienced after the flooding is the importance of underwater inspections and the evolution of the situation when the water withdraws. The Belgian railway manager is in the process of making a risk analysis for climate change on the railway network, including the risk of flooding. Efforts are also made to check embankments in regions that could be flooded and categorise them in order of the risk of becoming unstable when flooded, which Kamoen is also working on. A task Infrabel also has to carry out is to check railway tunnels to see if the pumping installations are capable of dealing with heavy rain, he says. In the near future, new rain data will be available to work with.

The floods had a lasting impact, and show how better preparations are needed for cases of extreme weather, but also emergency responses. Kamoen: “We currently have snowfall and heat procedures in Belgium, but we should also have emergency procedures for heavy rain”.

A replay of the RailTech webinar about Climate Change Adaptation is available via this link. Other guests included Katrin Neuhaus of SBB on adaptation at the Swiss Railways, and Auke Blokland of CGI on how satellite data can be useful for mapping floods and rail subsidence. At RailTech Europe in June, Rail Resilience and Sustainability is one of the three topics of the conference with many more speakers on this subject.